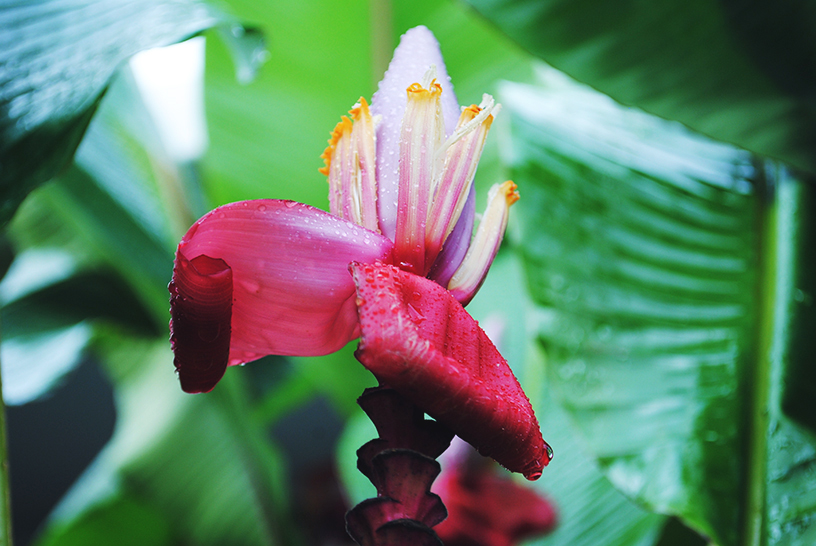 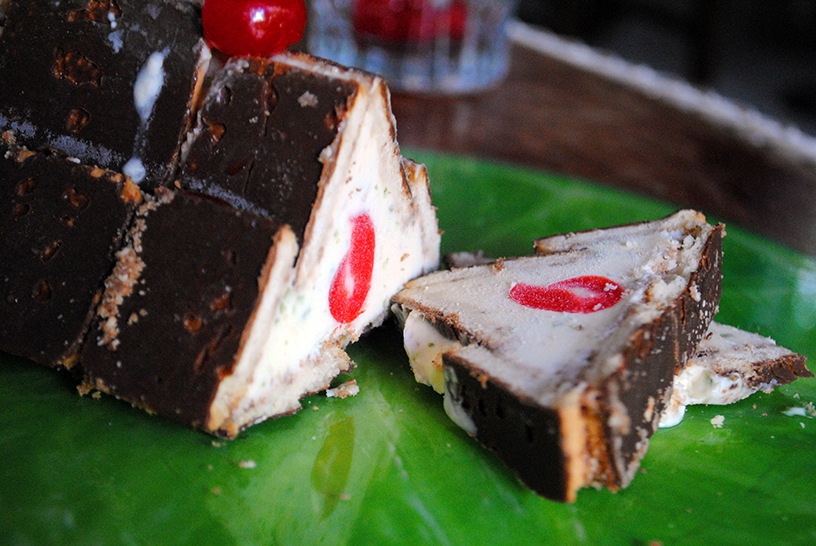 It took me forever to figure out exactly how to approach making a cheesecake. For some reason, it had been the thing that we were craving most (in my case probably because of watching too many cooking videos on the bus). It was obvious quite early on that it would have to be a refrigerated cheesecake because baking was out of the question – except maybe if we were willing to send the landlady dilly and dig a fire-pit in the garden. We sometimes have a very limited amount of cookware where we stay, and in Puerto Viejo it was very much the case, so the other big challenge was trying to figure out which pot or pan could stand-in for a cake tin… Make a smallish cake? Or rather no cake then? I mean, what is the point of a small cheesecake?

After a rather too long time pondering these challenges and not quite getting to the making (it is amazing how big a deterrent not having the right tools can be), I finally remembered the iconic 80’s triangle frozen cheesecake my mom used to make while we were growing up. It has the distinct advantage of both being frozen (no need to go on the hunt for gelatine and then go grey in an effort to set it) and it is shaped with foil, instead of in a cake tin. We had to surrender and buy a whisk – it now forms part of our travel kitchen (together with our coffee filters, my knives and Campbell’s long-stemmed teaspoons and cake forks). 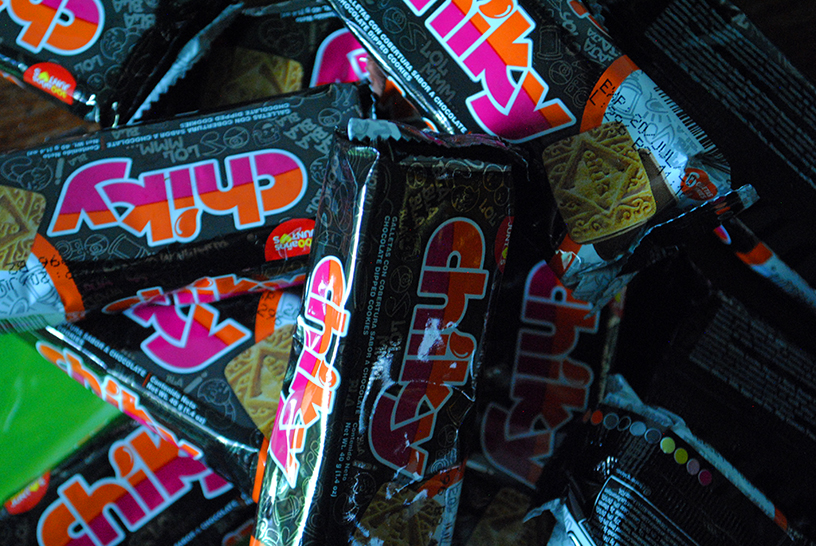 I replaced most of the ingredients in the original recipe, mostly because I wanted the cheesecake to be Costa Rican in flavour – lighter, less sweet and unmistakably tropical. My mom’s version was made with tennis biscuits and had glazed cherries in the middle. It was covered in Nutella and the cheesecake mixture contained butter and a (raw) egg – not a thing to be fooling around with in the tropics and when dealing with an unexplored supply chain (I thought).
Replacing the tennis biscuits was easy, the boyf first bought us Chiky cookies on recommendation from the lovely neighbourhood shop owner, she claimed that they contained less sugar than Oreos. A very valid point, but for me not quite as important as the fact that they were produced locally (or even more importantly, that one got a free monster skeleton sticker inside). The biscuits came conveniently covered in chocolate on one side, so there was no need to cover the cake in chocolate spread at the end. Incidentally, we discovered that this chocolate layer freezes solid with a nice crack under-tooth and that that added to the eating very nicely. 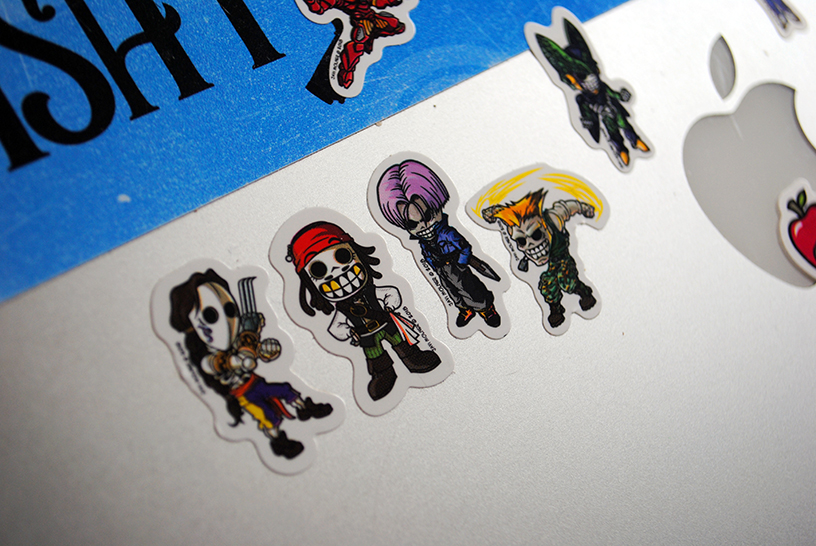 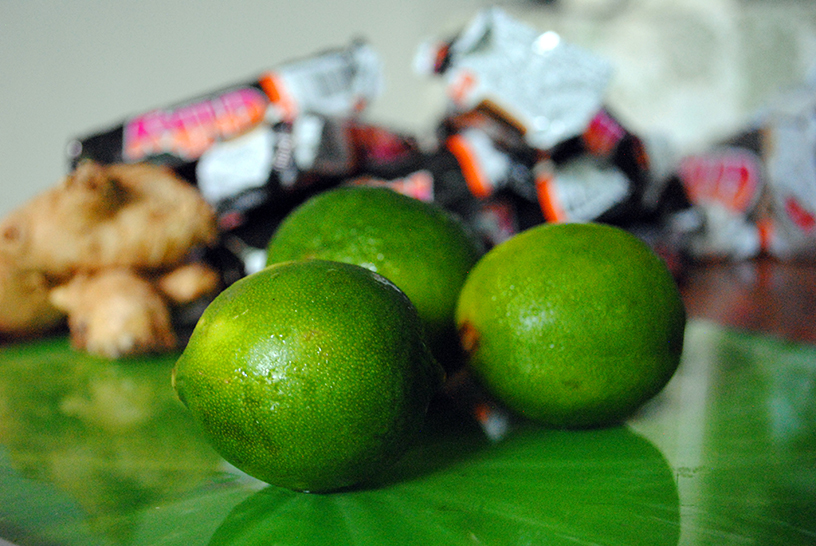 The cheesecake mixture came together with two dairy products available in most supermercados in Central America, a lovely slightly savoury cream cheese and a cultured cream that was packaged, quite unusually, in a tied-off plastic pouch (there was no finding whipping cream or double cream in Puerto Viejo anyway). I also used a beautifully golden, local raw honey – a replacement that pleased my anti-refined-sugar little heart to no end. The main flavour of the cheesecake was from the floral and fragrant limes of the Caribbean (there are a delightful amount of limes available, from tiny baby ones to plump big ones with orange insides). When I first tested the mixture I found the lime by itself a bit one-dimensional, so I ended up pairing it with freshly grated ginger (something a little warm to hint at the thrumming tropical heat that had us horizontal and sloth-like by mid-day). In the final frozen product, you couldn’t really taste the ginger, it just added a slightly warmer, rich complexity to the taste. 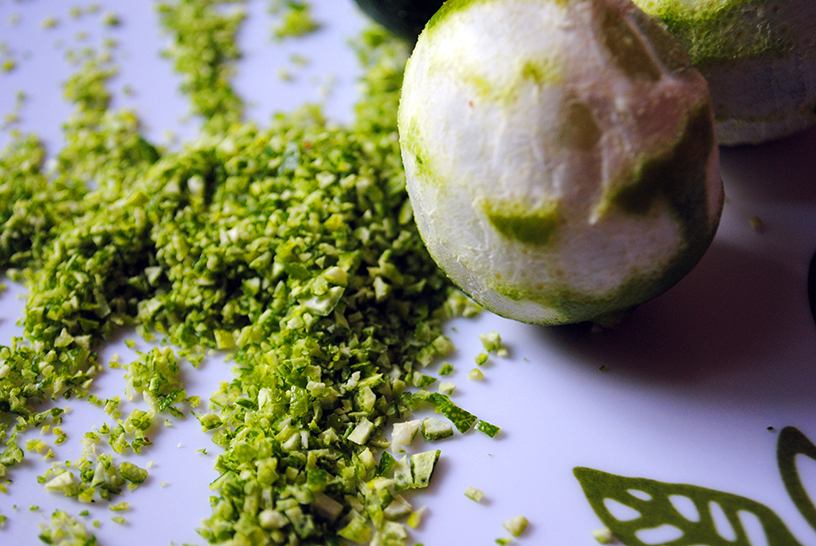 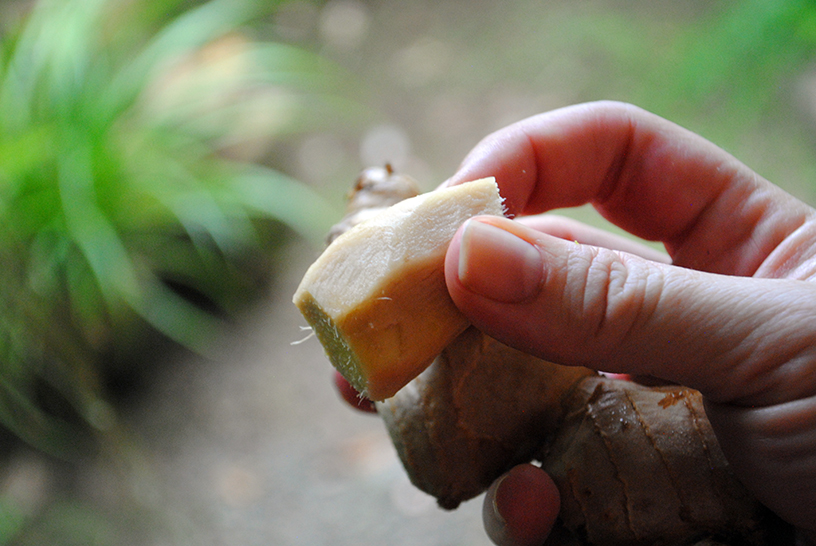 I very badly wanted to replace the sugary cherries in the centre with a kind of red fruit or local berry, but we couldn’t find anything that fitted. You do definitely want the lovely red pop of surprise in the middle when you cut through it – just lovely and festive, surrounded by the specs of green lime zest. The boyf returned from one last red fruit hunt with a bottle of Maraschino cherries and that is what ended up going in. We loved it. The sweetness played off beautifully against the tart and fragrant cheesecake inner and I immediately decided it is an essential component, retro or bust. 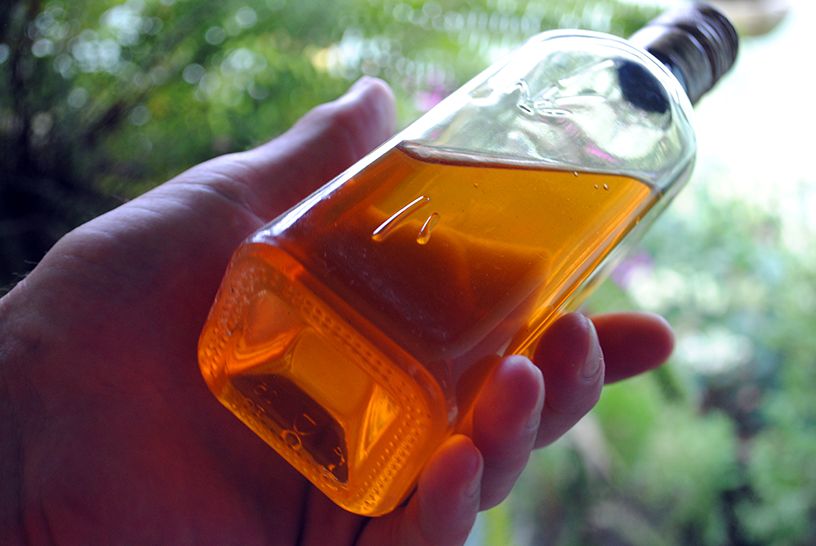 By the time I eventually made the cake, I discovered a significant design flaw in my construction plan. Instead of neatly folding into a triangle like the original (with one line of biscuits on each of the 3 sides), my version with two rows of cookies on every side couldn’t carry the weight of the filling and collapsed at the top. What the hell though, it was close enough to Xmas to get away with a tree-like shape and it still looked kinda cute. Apart from that, it is so unbelievably delicious that getting the recipe out became a bigger priority than fluffy perfection. You have to try this. Trust me, it will make your summer! 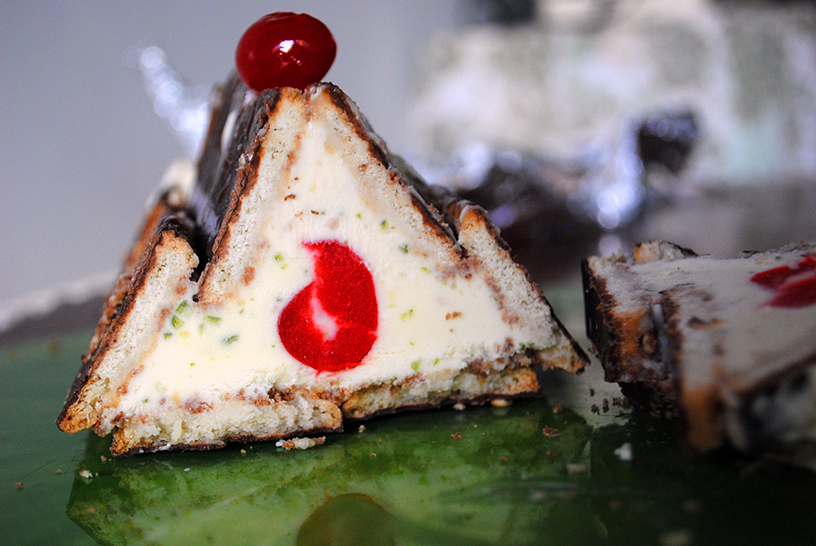 The day after (when it had finally set) the boyf kept on pushing me to make another for better structure and better photos and all I could think was “dear lawd, no – we can’t possibly eat another of these tomorrow, it is obscene” – because yes, we did polish the whole thing in one day. 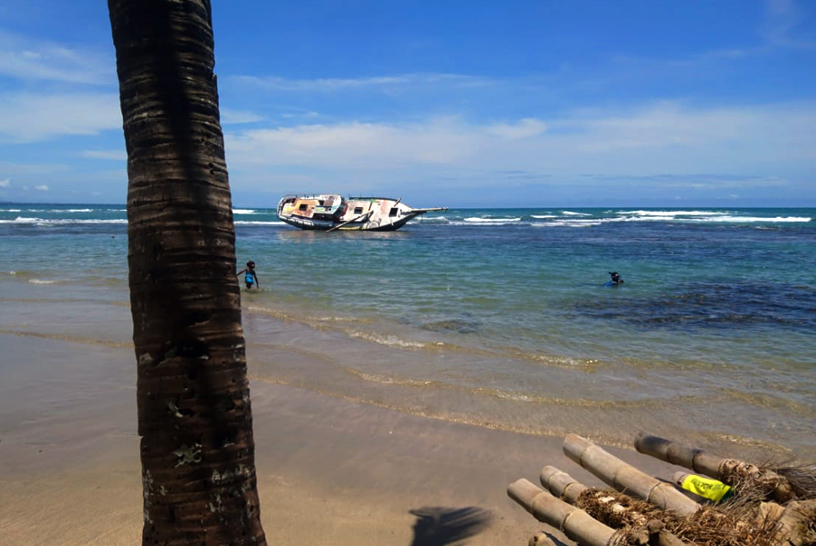 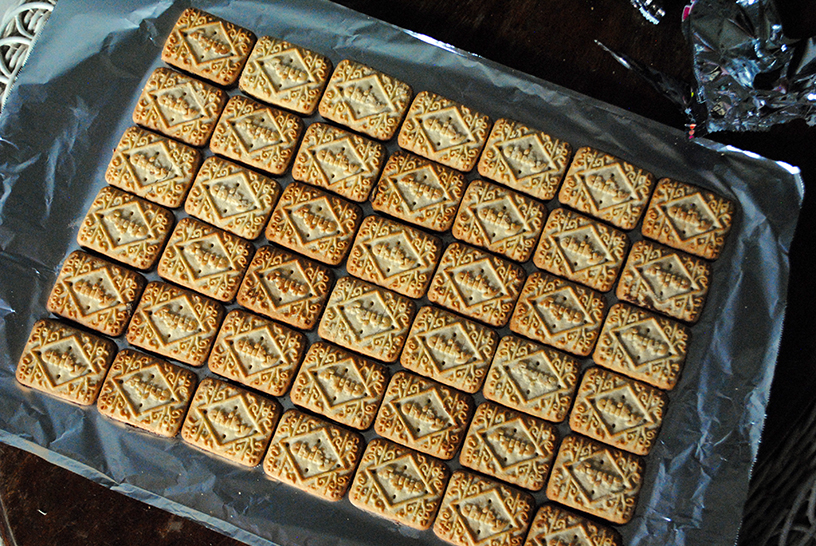 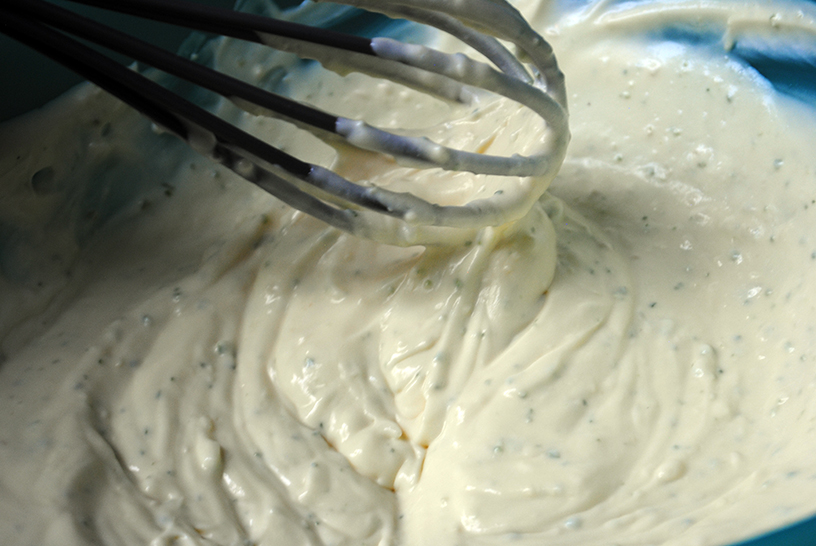 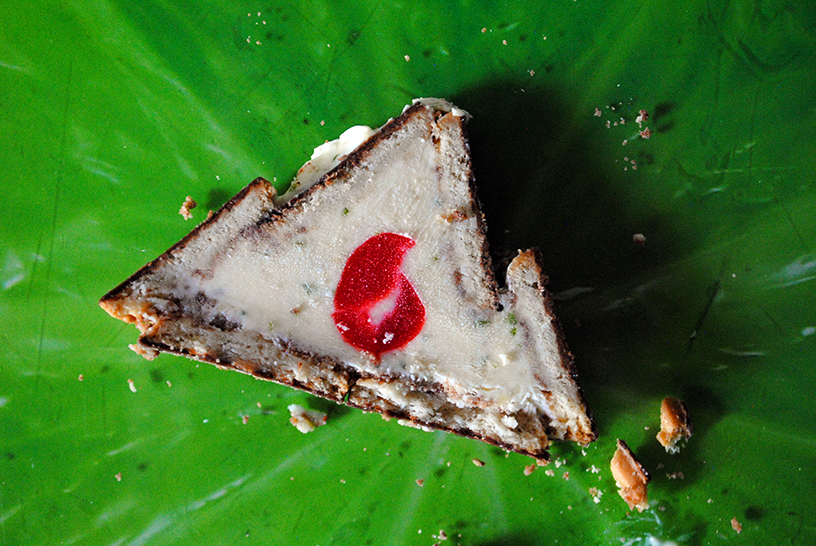 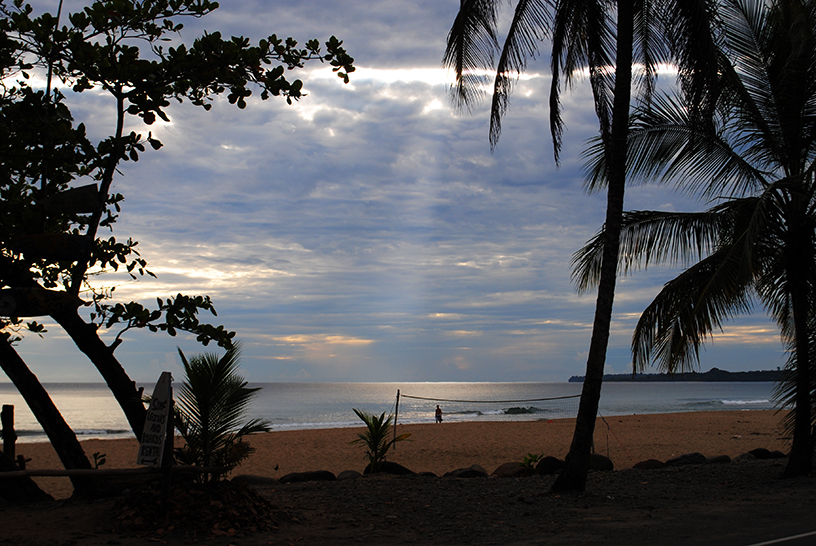