Puerto Viejo, Costa Rica and Where It All Began 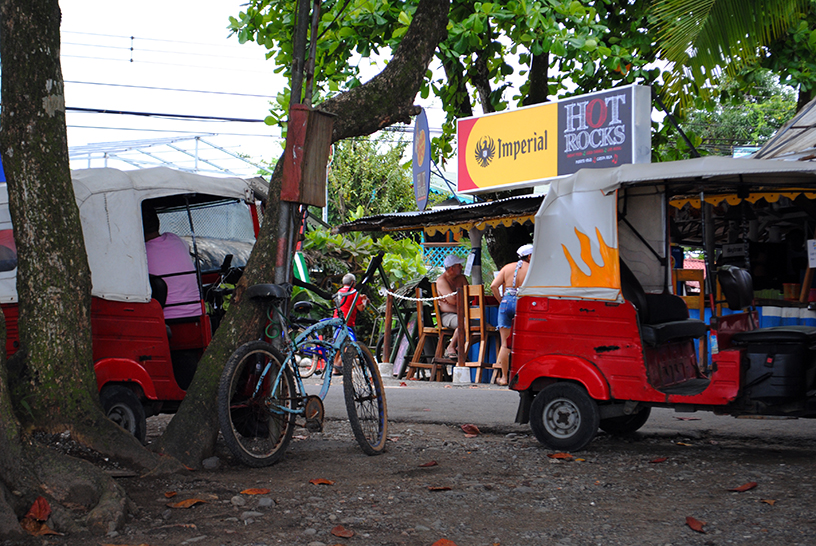 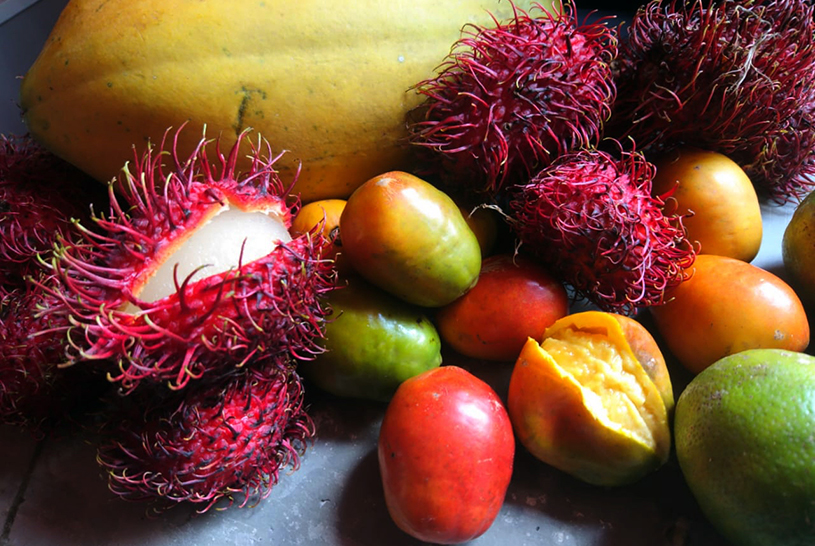 Whereas Japan made me feel raunchy and India made me feel brave (maybe even reckless), Costa Rica made me feel drunk. Not stupid, inviting-strangers-home drunk, just happy-tipsy-friendly drunk. Salsa and Latin American pop greeted us on the way from the airport and never stopped thundering from everywhere, in between church bells and hooters and children screaming with (what sounded like) glee. The breakfast fruit was rambunctious, the money storybook pretty and the air wet and hot and ozone-d. The taxi ride from the airport to our little apartamento was a screaming adventure down the road to psychosis. I mistrusted the two boys that drove our taxi (one of them chatted us up at the airport) completamente, poor things. In my defence, I was stupidly sleep-deprived, spun out by a manic rush hour and they were almost as lost as we were. That was before it started to get dark. Let’s just say that the barrio we stayed in would have been better arrived upon in the cheery light of day.

If somebody had to film us arriving in Costa Rica, we would have looked like squirrels on and about the first acorn of the season – not sure how to stand, where to put our feet or how to believe our luck. We were going to do this thing – live simply, work online and instead of doing this at home we would live in any and every place where we could go (without visas, to start).
We would only need to arrive, have rent for a month and then we’ll take it from there, no?
Well, yes absolutely, more or less. I wouldn’t necessarily recommend living quite as on the edge as we did, but we eventually just left home. It felt imperative. I felt chased. (I also have a rather esoteric belief that if I truly am a fruit of this rock, then I should be able to go about everywhere and every part of the planet should be home – but that is a discussion for another time). 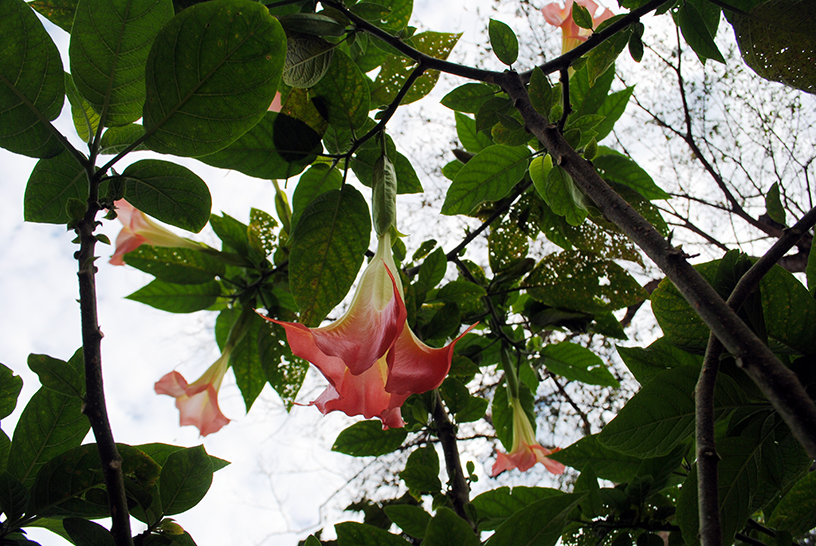 Costa Rica is expensive, not Sweden expensive, but far more pricey than home (prices compare better with the US). It might sound strange, but we simply didn’t know. Sure, we checked it out a bit and gave ourselves a budget, but we were a bit high on just hitting the road. It had been a long time coming. We might even have been a bit dilly – in itself lovely, but not necessarily a sensible or particularly discriminating state. In retrospect, we could have made our lives much easier by easing into the life in a cheaper place.

We were lucky that everything seemed to lead us to Puerto Viejo. We stayed in the capital for a week without the foggiest idea of where we were going to go and everybody just seemed to think we were going to go to Puerto Viejo. So we went. The bus was luxe enough and very affordable and we landed in a tropical paradise of such splendour and fecundity that nothing else really mattered. Our first steps were through deep puddles and a warm downpour that couldn’t have felt more Caribbean. We cleverly established a routine of booking two or three nights upfront and then finding longer-term accommodation on the ground. It has worked well ever since. 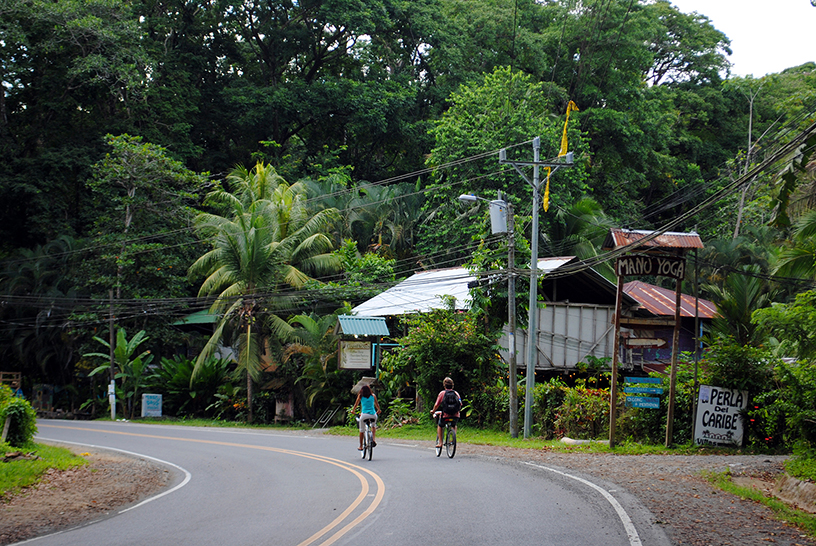 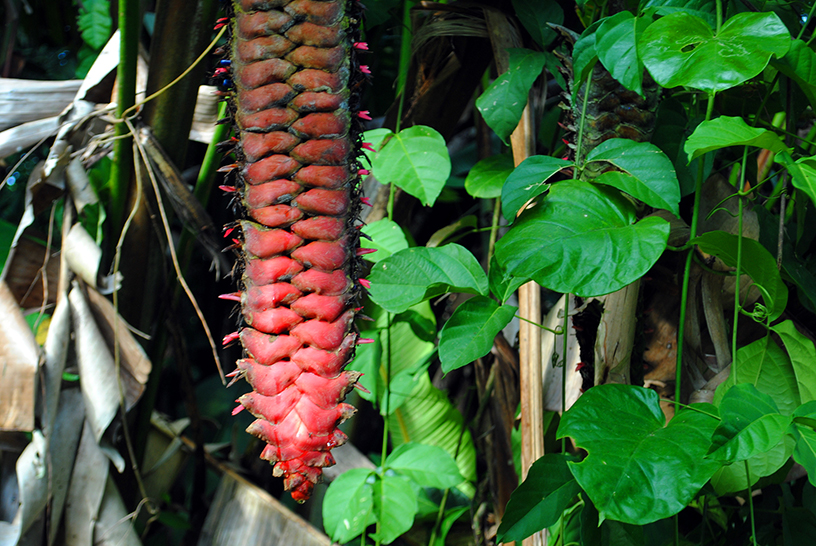 It took a while to find a toe-hold in the deep moist of the jungle. The community in Puerto Viejo is a strange, transient one, deep in tourists and foreigners. Things are also loose. Even just a corrugated sink plate and a cooker can a house make. As long as you can keep the rain out, you can basically live outside. The jungle is fierce with life. Blue butterflies the size of dinner plates, little families of agouti (a shiny red-brown rodent about the size of a cat that looks like a small deer at first glance but that uses its front paws like a squirrel), locusts the size of rats and a bewildering amount of chittering, humming, buzzing birds. Tiny brown hummingbirds with tongues again the length of their beaks will come right up to your face to investigate. 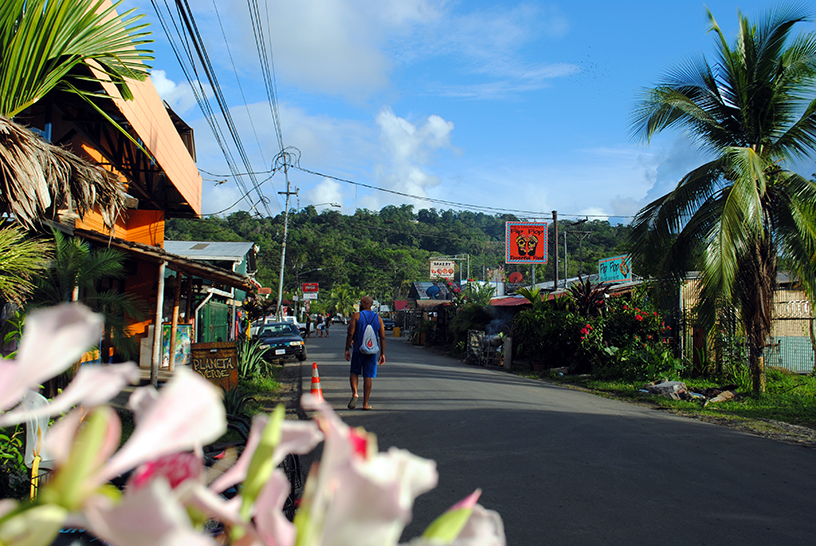 After four nights, I was still perplexed by small practicalities. How to dry clothes, how to find a bucket or an extra shelf. How to truly integrate. Our little house was filled with mutterings in Spanish. An obvious way in and through to a more connected life.

Somewhere during this time, I found a new measure of zen in regularity and routine. A poem by Garcia Lorca called “La cogida y la muerte” later became a refrain I can now hook up to see that time through. In the poem, things happen (for many reasons and lasting many phrases) ‘a las cinco de la tarde’ or ‘at five in the afternoon’, but for me, it was mostly at five in the morning. 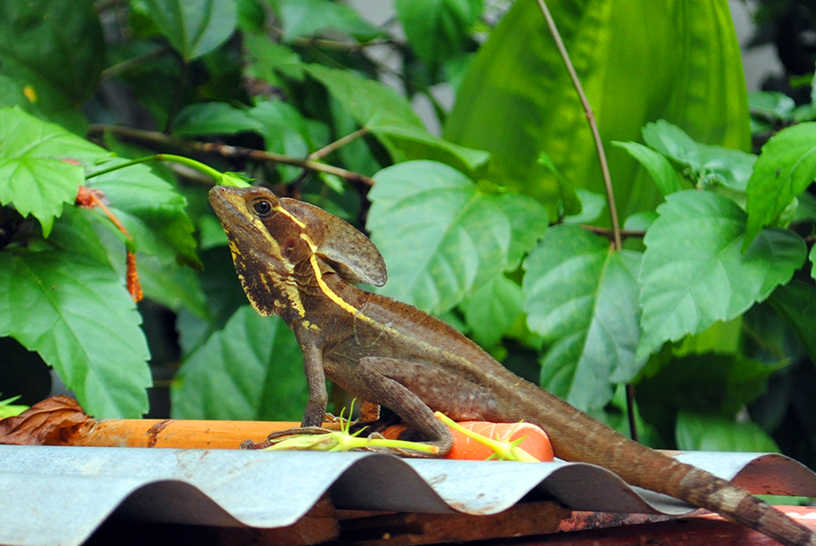 The sun rises early and I’m set on taking advantage of it more and more. This morning started at five with the sun already peeking through the tops of the trees and I wonder at our ability to nest. Only hours after moving in we are making small lists of comforts needed and in my case, even decorations. Little house mice. Living in the jungle. 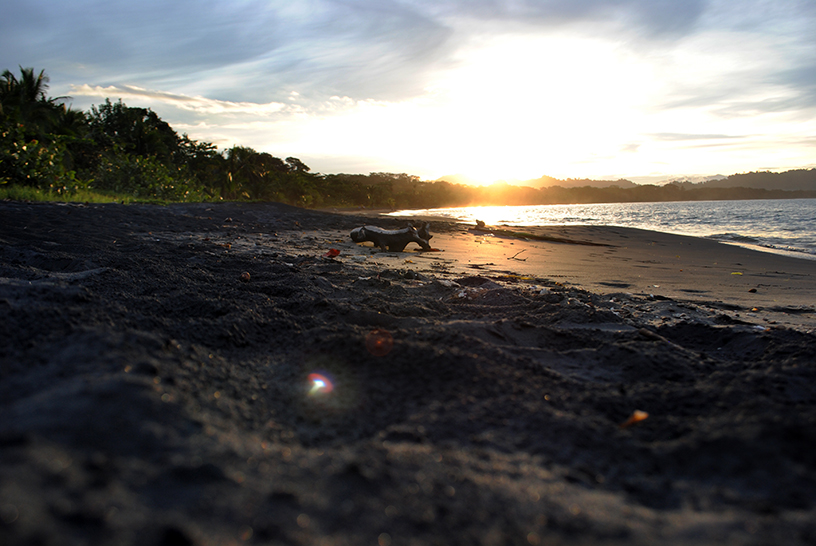 It is a bit like living in a massive open-plan reggae bar (picture a Tings & Times the size of a village). At five in the morning, the village would feel hung-over and dewy and I’d wander through the deserted streets (sometimes still with a stumbling drunk in) marvelling at how everything looked exactly like somebody’s lounge the morning after a big party – nothing packed away, everything completely open and unlocked, just with sandy footprints all over the floor. 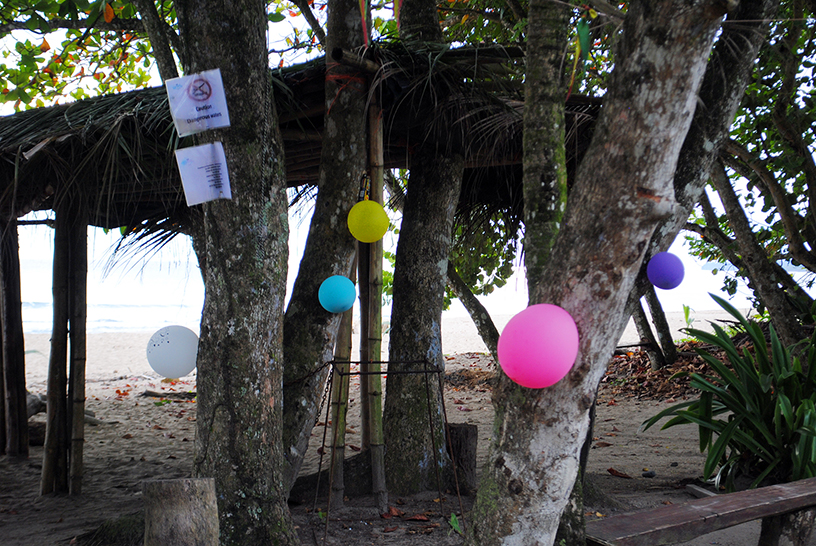 At five in the morning, it is very quiet, already warm and rosy and smelling sweet, as if some night flower had just closed. At times I see another older lady walking her dog. I walk on the little beaches in front of the village and sometimes I have to climb through trees and in places onto the road to avoid the soft grey waves making me too wet. 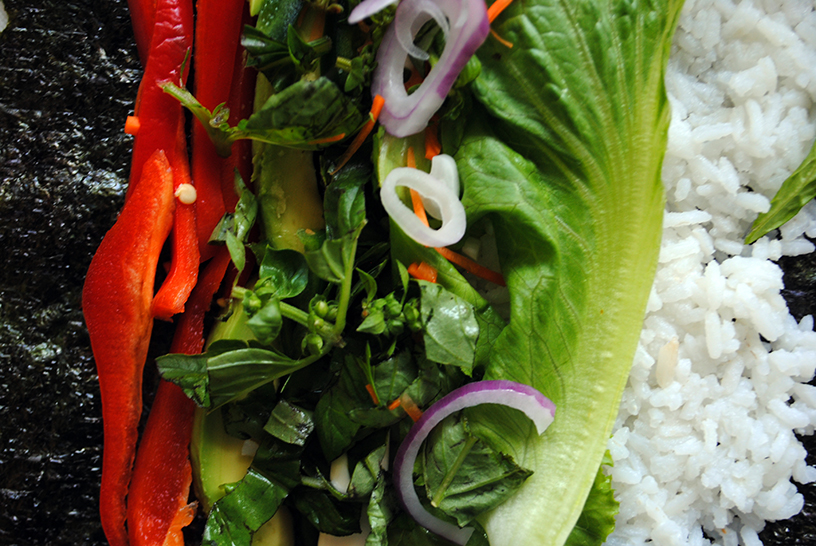 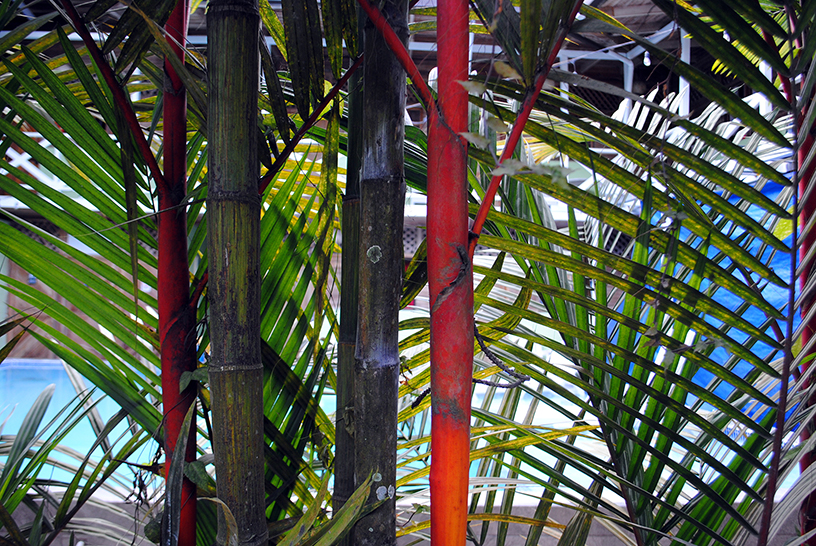 The first day that we slept in our little bungalow at the back of the village, we woke at five in the morning to an incredible rumbling sound. Half monster-bellow, half world-ending gurgle. I jumped into some clothes and scrambled outside, still wiping dreams from my eyes. I couldn’t get close enough to see what was making the noise (mostly because I wasn’t ready to wade barefoot and breast-deep through a field of wet grass that separated me from the source) but I stood listening for a good while and was finally convinced that the sound wasn’t man-made (the drain where we stayed had a similarly disturbing bellows-from-hell sound, so one can be forgiven for first thinking ‘who the hell makes such a racket at five in the morning?’). In time we got used to the sound of the howler monkeys at the fives of the mornings and we often stood open-mouthed, bicycles propped against our hips, watching them jump from tree to tree at dizzying heights. 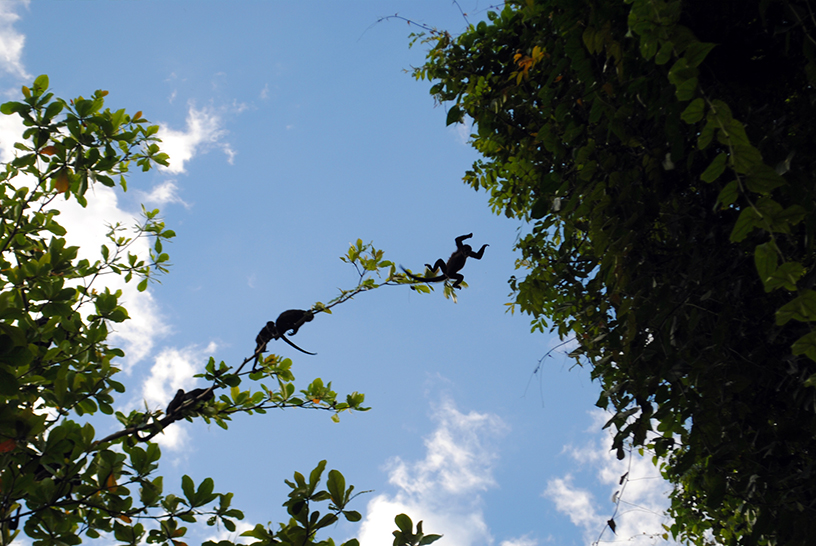 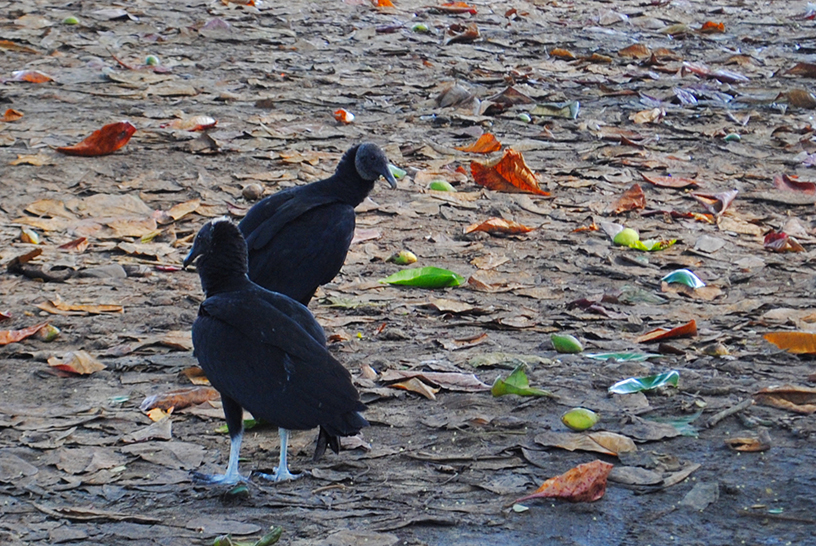 We bought two second-hand bicycles from our French neighbours (it wasn’t at five in the morning) and that was us – lazily drifting up and down the coast with no real desire to do anything else. Every day we’d find some new species of creature to marvel at. A bunch of the strange black birds that look like vultures, circle like vultures but whom I then discovered dismembering a coconut on the beach. Some days the sky would be black with raptors in astounding numbers, it turns out that Costa Rica is on a raptor migration route. 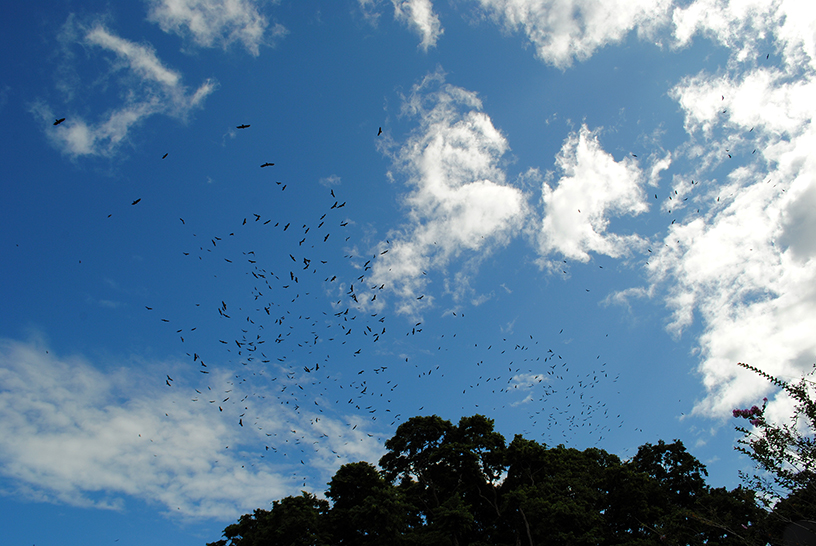 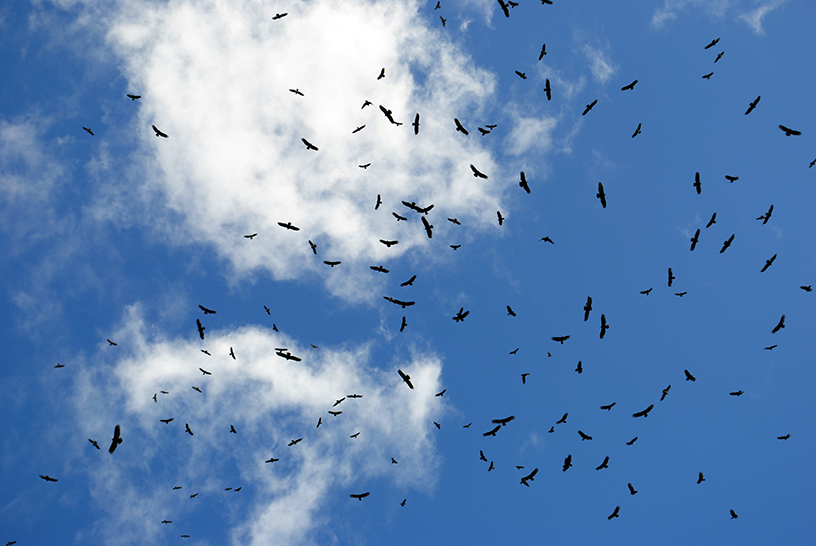 Outside the kitchen window and over the tops of the buildings across the road we could see enormous lizards high in the trees. One morning (it must have been way past five) we watched for an hour what seemed to be the dramatic rescue of a baby sloth by two medium-sized sloths. We hoped that the high-pitched noise that alerted us to scan the (100m high) trees had stopped because the baby was reunited with his mother.

I once saw two green billed toucans flashing against the sky and alighting in the same trees. I had no idea such birds even existed until I searched it online. This could have been around five. 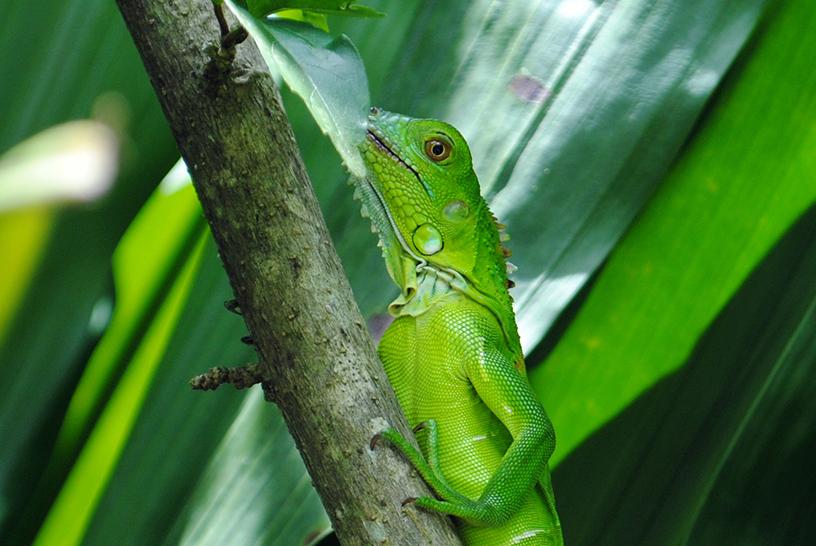 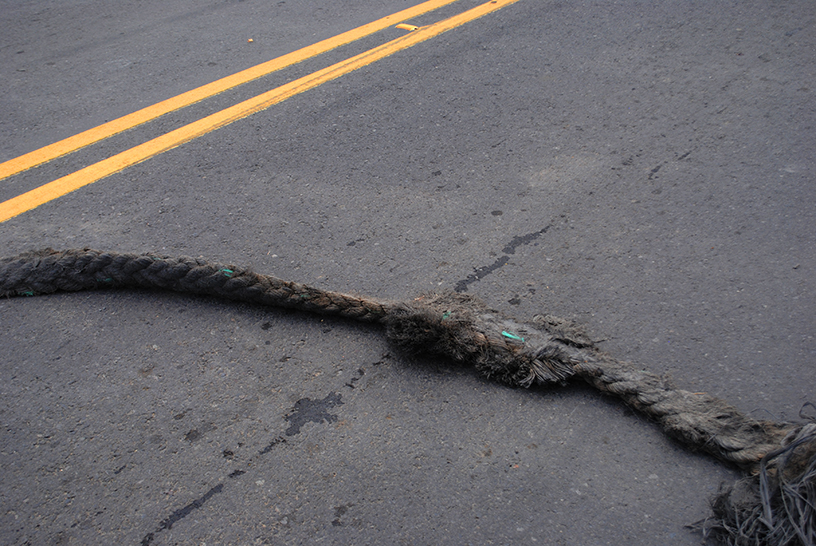 One evening just after sunset I walked up the road a bit to smoke (what turned out to be one of my last cigarettes) and came across an enormous python lying across half the road, its head close to a puddle formed by the rain. The thing is, everywhere in the village they have these fat marine ropes slung across the road (maybe as speed bumps?), so I almost stepped on it when it curled back on itself to get away from me. I was surprisingly calm and sweetly greeted it in a quivering voice before despairing at not having a camera close. The light was probably too low for a photo anyway, at five in the afternoon. 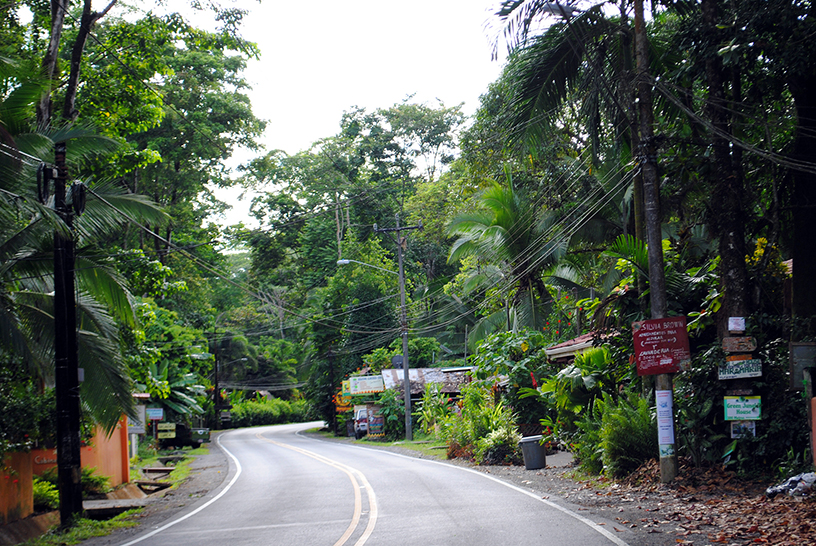 On an otherwise insignificant very early morning we woke with the house shaking and the world clattering and rumbling. We were so unconscious, I just remembered touching Campbell’s chest and telling him that everything is ok, before falling back asleep. In the later morning, we speculated that it might have been wind or thunder and I almost left it at that when an internet search revealed a 4.8 earthquake with the epicentre just a few miles away. We were quite thrilled with our first little earthquake at about five in the morning. 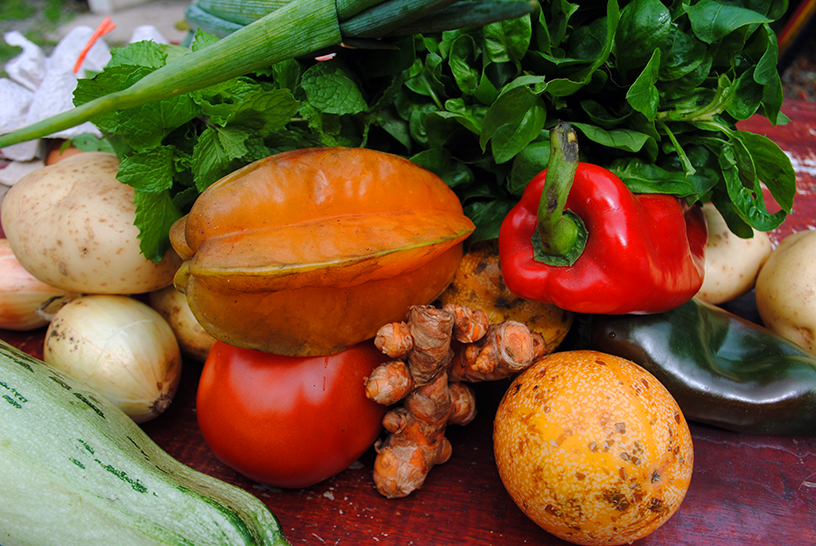 The last day in Puerto Viejo, not even close to five in the morning, I wrote the following goodbye: ‘We will love you forever, you squishy little Caribbean hamlet. Thank you for obliterating my residual anxiety, thank you for smiling in our faces with your hot and loving breath every glorious day and thank you for letting me stroke your cats. Kisses.’ 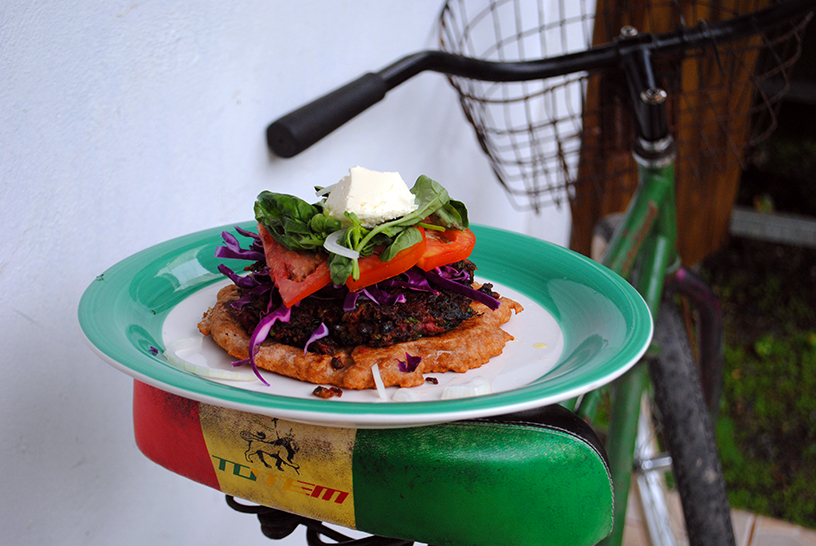 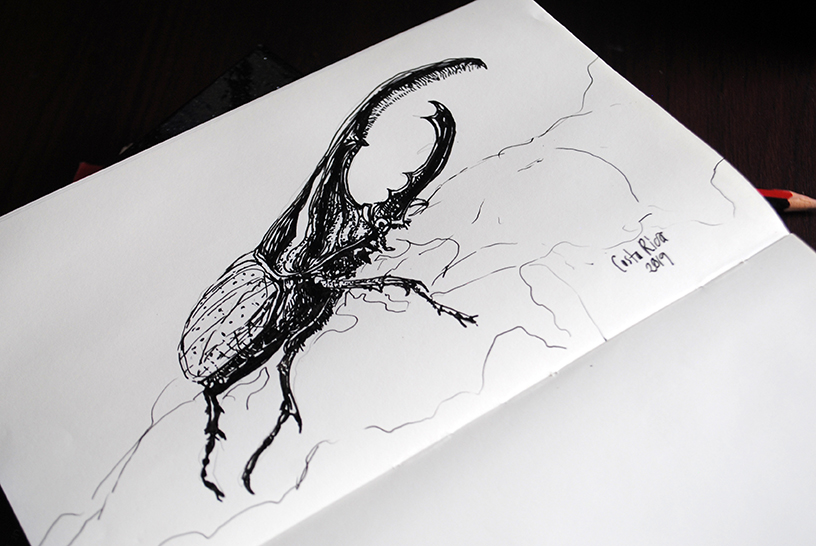 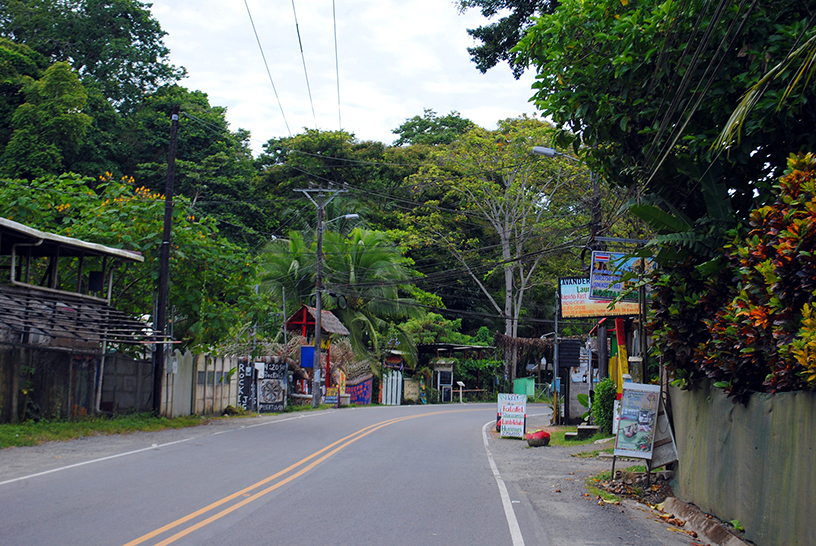