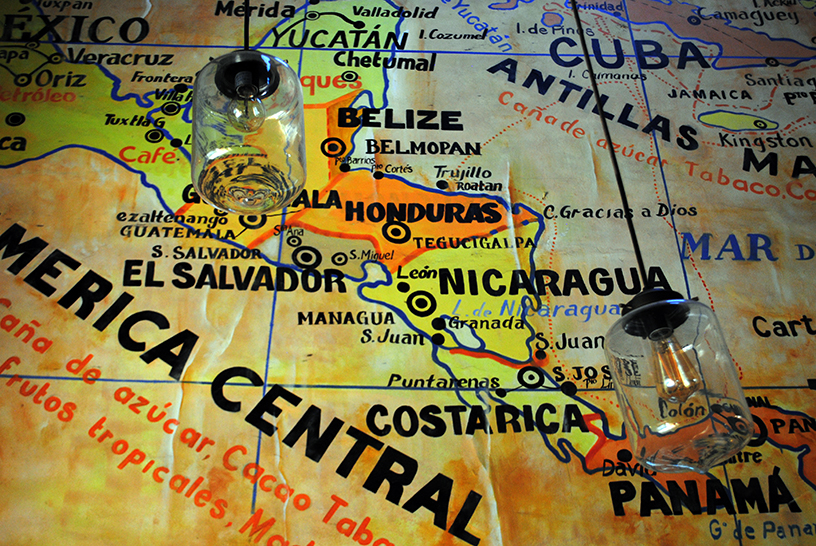 By the second time we take the bus between San José and the border, we feel like old hands, comfortably slotting into the melee of border crossers that stream down Central America on various adventures. One could easily feel oneself a late 1800’s explorer looking for the city of gold, or maybe a smuggler of rare herbs or another kind of Panama-hatted operator from the romantic era of exploration.

The feeling of travelling on the ground is completely different to travelling in the air. Time is suspended and collapsed, for want of a better word, into a strange psychedelic middle-world, where one is neither here nor there and sounds and colours are amplified to create a type of hyper-space. Every other border-crossing one has ever gone through is somehow pried open and available as an extra overlay, laterally accessible. I was both in Central America and in my school girl body on the border at Beitbridge; both 40ish and newly escaped from varsity to queue nervously on the border to Swaziland; the sweat gathering down my back was both new and smelt of the ocean and that particular metallic tang of the air in Maputo.

The wild tropical jungle in the South of Costa Rica gives way to a more moderate and tamed landscape to the North. Guanacaste (Costa Rica’s North-most province on the Pacific side) had been dry for many years, part of the reason why we decided against staying on in our good friend Gonzalo’s beach house there. We see farms and signs of dairy operations on the way, including a massive billboard with a smiling man advertising the Dos Piñas dairy brand we loved the sour cream of. The bus gets hot around midday and stopping becomes unendurable without the breeze of movement. 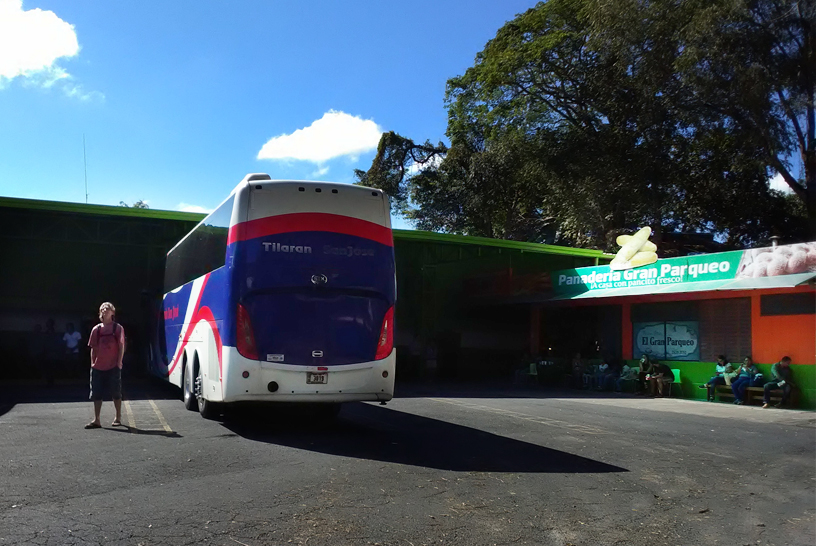 At the pit stop halfway between San Jose and Penas Blancas, we tumble out into the heat and buy empanadas at a little stall window to eat sitting on the sidewalk like skateboarders. They are like the Central American version of garage pies – only wrapped in a maize flour dough and sometimes fried rather than baked. Filled with beans or cheese or meat, they serve a very similar purpose as a pie (to be a portable pocket of food) and can be absolutely scrumptious – also similar to a garage pie they can, on a bad day, be revolting. At this juncture we are lucky and the empanadas are delicious, rich and crumbly on the outside with a savoury and perfectly spiced bean filling. We’re quickly sad that we didn’t buy twice as many when the bus is already hurtling around the copious corners on the way to Nicaragua. About an hour before we reach the border (the boyf says much longer), we come across a line of trucks waiting to cross and for many many kilometres we are swinging in and out of the road dodging oncoming traffic. We never see the trucks move even an inch, it must take them days to get across. My mind again swims into a racy adventure filled with high-speed chases and frozen fish and iced-up crates hiding contraband and the whop-whop-whop of chopper blades. I look with new interest at the truck drivers who are suddenly indistinguishable from pirates.

The border itself feels like a lazy afternoon in the low veld of Africa, the trees are different, but just as orange and green and canopy-like as in, say, the Skukuza bush camp. The birds are also different (there are no Hornbills for example and the Starlings have wider tails and longer legs and are called Grackles), but they match their African cousins in cheeky attitude and boisterous screech. I am grateful that we have plenty of time to go through the various checks because despite having seen a blog describing the process step by step, it is still confusing and disorientating to transverse this line. There are no indications of where to go or where one country begins and the other ends. There are some small fees to be paid, one of which, on the Costa Rican side, in a small shack across the road from the customs office, completely indistinguishable from the shacks on either side. 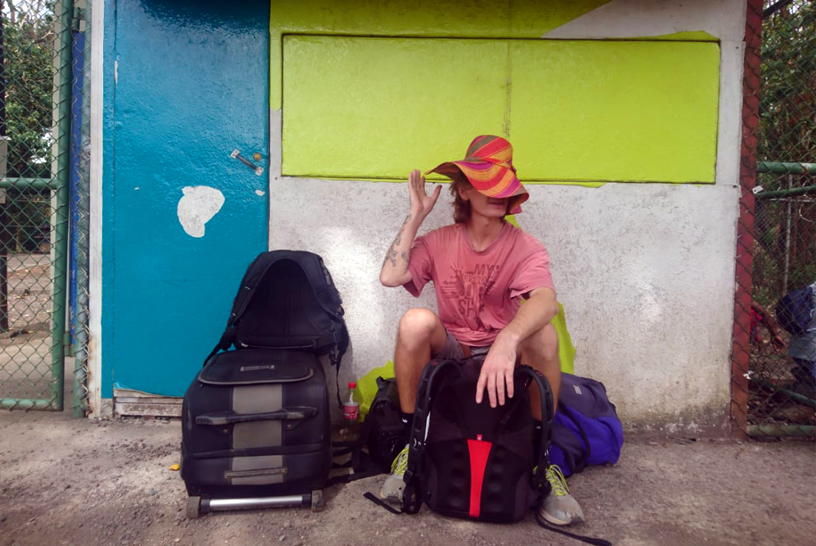 For a moment I think that maybe we are approaching the crossing too casually (there has been none of the preparation or paperwork necessary to pass into the US for example) and even though it is difficult to imagine exactly how, it feels like we should have taken it more seriously. Borders are serious business after all… as a citizen from an old British colony, I am all too aware of the artificial and plastic-politic nature of borders. The way their very existence is loaded with strife and dispute, dividing people and aggregating violence. Growing up, young men in South Africa were sent ‘to the border’ by rote to die meaninglessly in incomprehensible battles or to return twisted and hollowed out. Almost like the very act of crossing over the edge changed them. An edge with edges that would end up haunting a generation of boys.

I am fascinated by the people in the queue with us, some of whom we’ll spot again and again everywhere we go. One small family with two boys have an accent I can’t place no matter how closely I lean in. I marvel at their guts to travel so bare and basic with small children.
It is difficult not to compare us, who are migrants by choice, to the very many people that cross this border unwilling and displaced…
We are the visitors, the Ausländer, the often-taken-for-gringo whiteys.
The lovely Salman Rushdie is possibly the writer with the most to say about frontiers, and it is particularly this bit from “The Ground Beneath Her Feet” (p.87) that plays with my mind.
“Yes… But what about outsideness? What about all that which is beyond the pale, above the fray, beneath notice?”
“What about people who just don’t belong?”
“Anywhere. To anything, to anyone. The psychically unattached. Comets travelling through space, staying free of all gravitational fields.”
“The only people who see the whole picture,” he murmured, “are the ones who step out of the frame.”
And I suppose that is my hope with all this meandering – that wider perspective, the loosening from hearth and heath – not to learn about how to make revolution (as I jokingly tell people), not only, but to ignite an uprising of spirit and inquiry and to burst across as many frontiers as possible – mentally, physically, emotionally, spiritually. 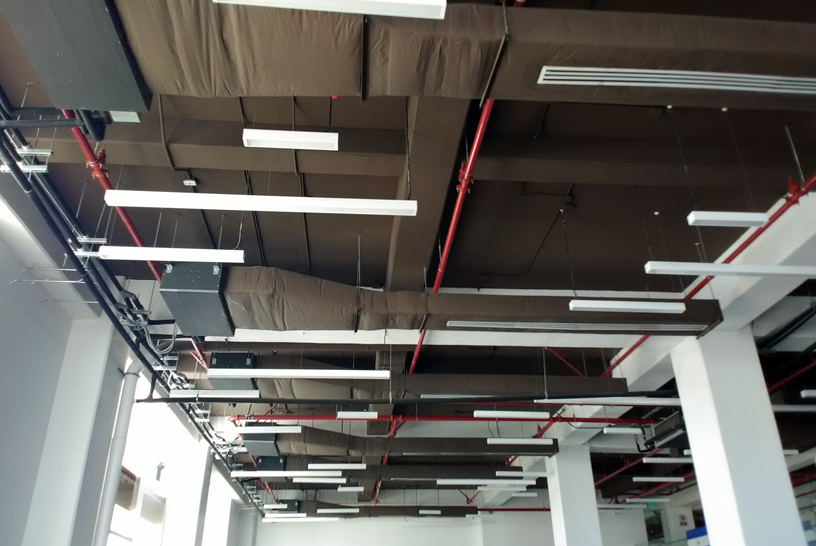 Somewhere on the no man’s walk between the two countries, we are stopped by an official who checks our passports and requests our yellow fever inoculation certificates. These we don’t have, I didn’t see anything about it being a requirement online either. The officials confer for a bit in Spanish, but luckily don’t seem very insistent and eventually accept our half-fudged explanation (lie) of having had the injection before entering Costa Rica. I later look up the countries for which the vaccine is a requirement and as neither South Africa, the USA or Costa Rica is on the list, it makes sense that they let us through.
I won’t deny it, there are moments of blind panic when confronted with a Spanish-speaking official and a problem. One feels bare and exposed and as if the shuddering glare of an all-night convenience store striplight shines on one’s every forgotten sin. It inevitably first makes me feel shy or guilty and then furiously helpless and coldly controlled in a rapidly-tripping, difficult-to-hide sequence. I’m always surprised when nobody notices and I can walk away buzzing with emotion. Of course, mostly I just want my Spanish to be fluent already.

The Nicaraguan official at the counter also takes our passports and disappears for a while without explanation, but returns smiling. For the very first time, we manage an entire interaction in Spanish without reverting to English once.

In keeping with the very jolly Nicaraguan flag that screams freedom and butterflies, we enter Nicaragua feeling welcomed and liberated and full of beans. 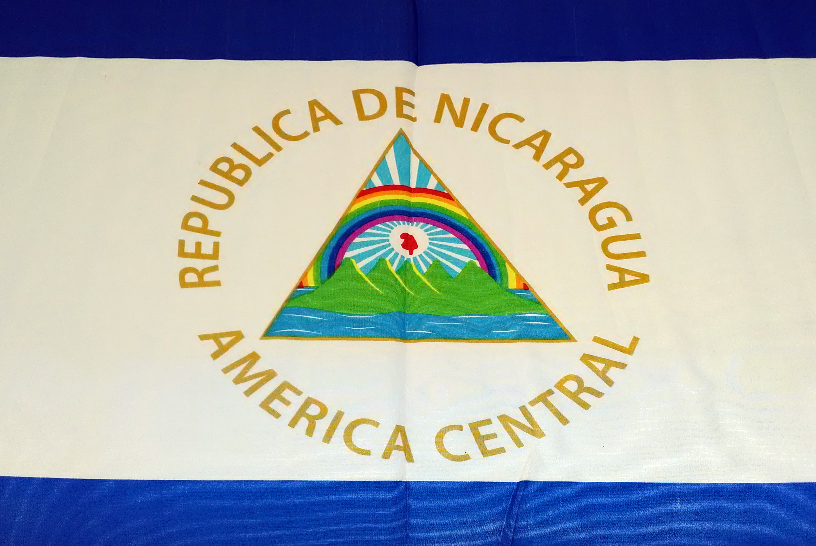 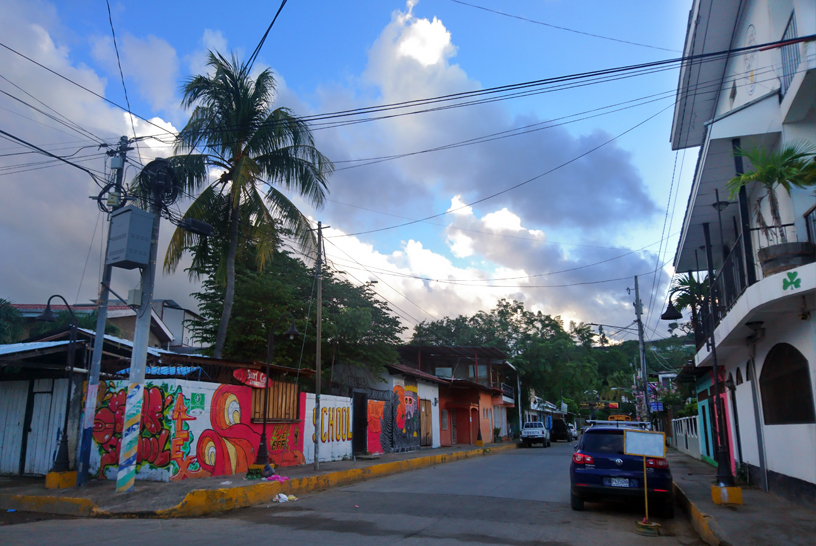