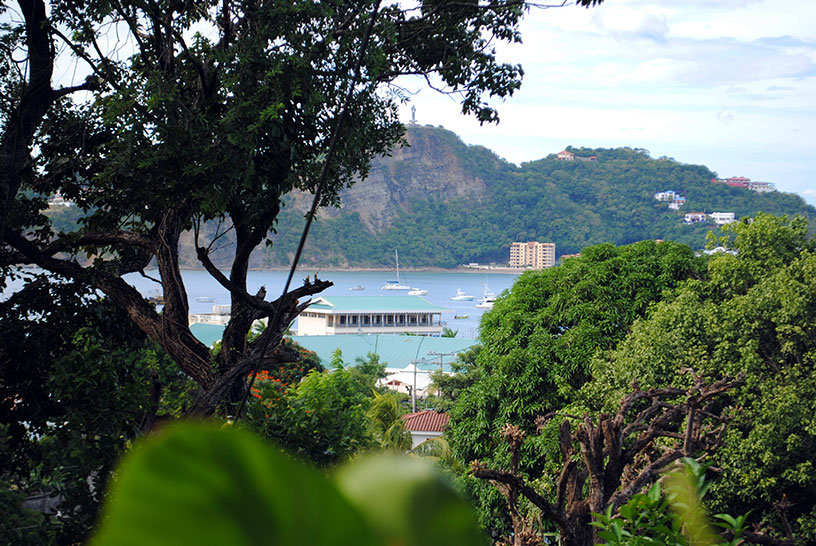 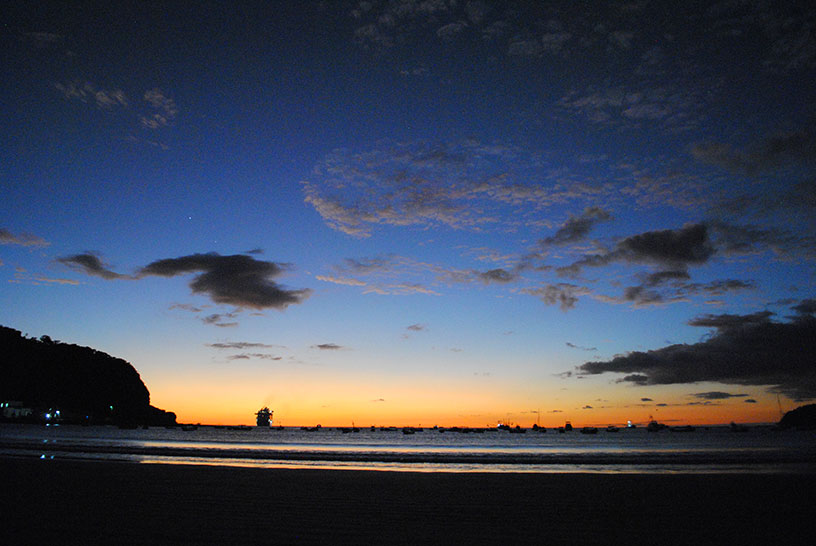 Even though I knew that it was probably silly to jump straight from one coastal tourist trap to the next, I loved the look of San Juan del Sur with its hills and promises of breezes. The little pueblo has the added advantage of being close to the border (one can easily travel from San Jose in Costa Rica to San Juan del Sur in one day by bus) and it is close to the pretty Pacific beaches, the lake and many of the volcanoes in the South. We could move on quickly anyway if it didn’t suit.

After walking across the border we stumbled around a bit in the fierce midday sun looking for a bus to San Juan del Sur and were met by a very jolly rotund taxista that looked from Campbell to me with exaggerated horror when we told him we were planning on taking a local (chicken) bus to San Juan del Sur. No, no no, it won’t do. Surely Campbell is not thinking of putting his missus on one of those busses? She is hot and tired and she deserves to be treated like a princess (or something very similar, delivered in a severely mangled English). Seeing as I was indeed sweaty and sweltering, I did my best to look like I was on the verge of fainting and possibly with some success because the next minute we were luxuriously ensconced in a modern sedan with the aircon pumping.

There was no question about it, crossing the line between the two countries landed us in a completely different place. It was immediately clear. Nicaragua felt cosy and less commercial, the landscape was wider and cleaner and the taxi cheap (not just affordable, but actually cheap – something we had not expected but were delighted with). The driver had no issue with our basic Spanish and gave us a broad overview of the country, the area, the sights and his family and personal history, all in an endless stream of entertaining Spanglish. 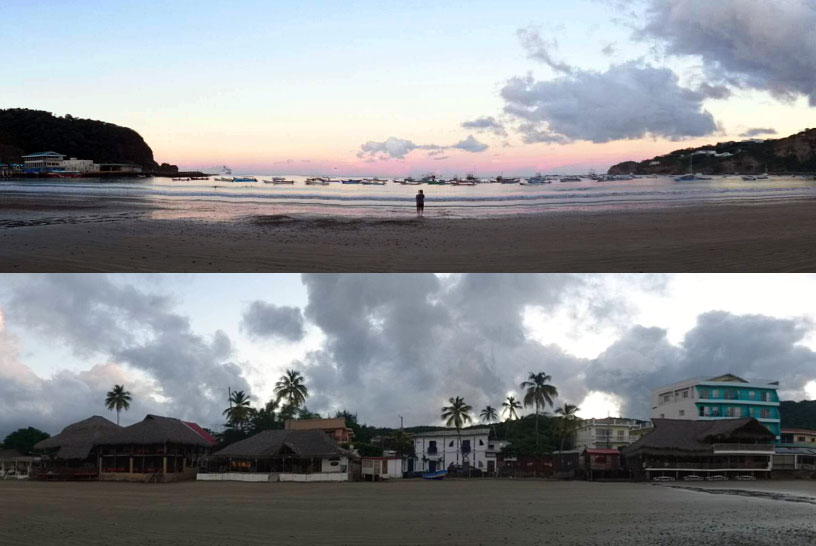 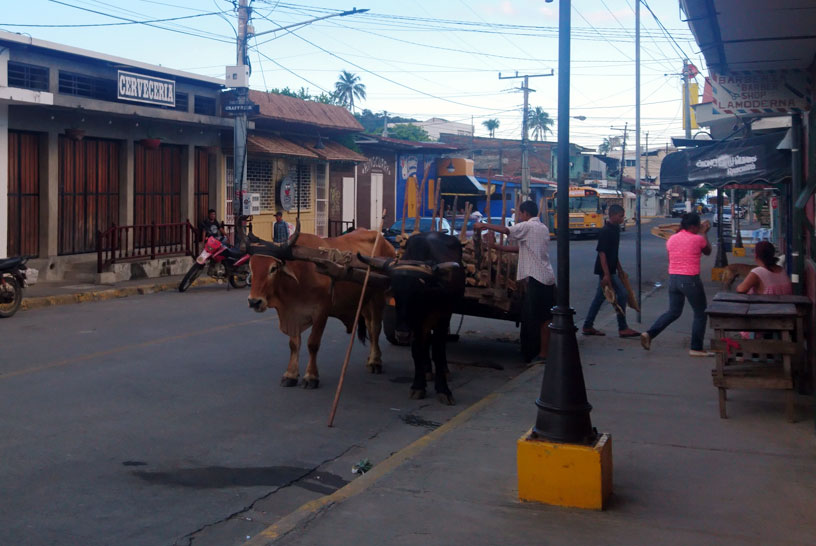 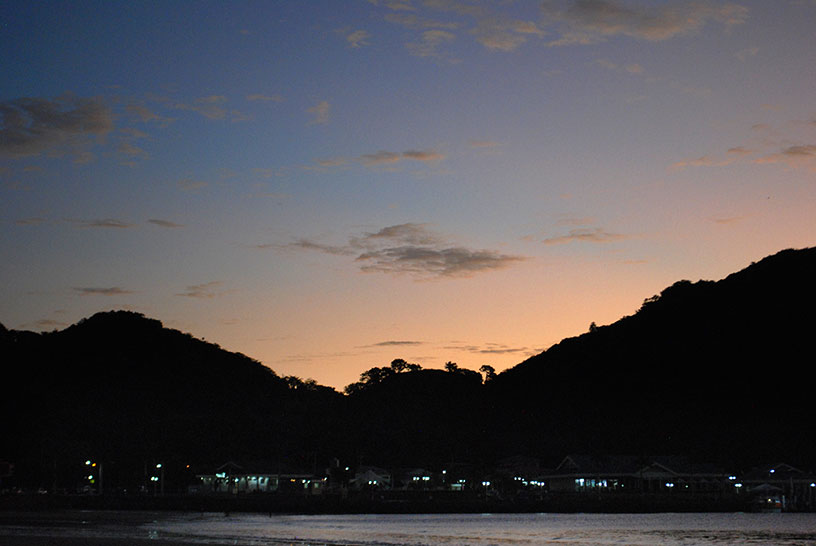 San Juan del Sur (Saint John of the South) lies seductively tucked between the hills of the Pacific Coast and looks out on a little bay that was constantly rocking softly with a fleet of boats. Our first rosy impressions of candyfloss, soda floats and lounging surfers proved to be correct, it is the perfect town for holiday and fun in the sun. We stayed in the very centre of town in what used to be a pink ice cream shop, delightfully named the Kiss-Kiss Rooms. We were surrounded by other residents and in the process had some proper conversations with fellow travellers and our host (a gem of a woman). It was here that we first became aware of the uprisings in Nicaragua in 2018. 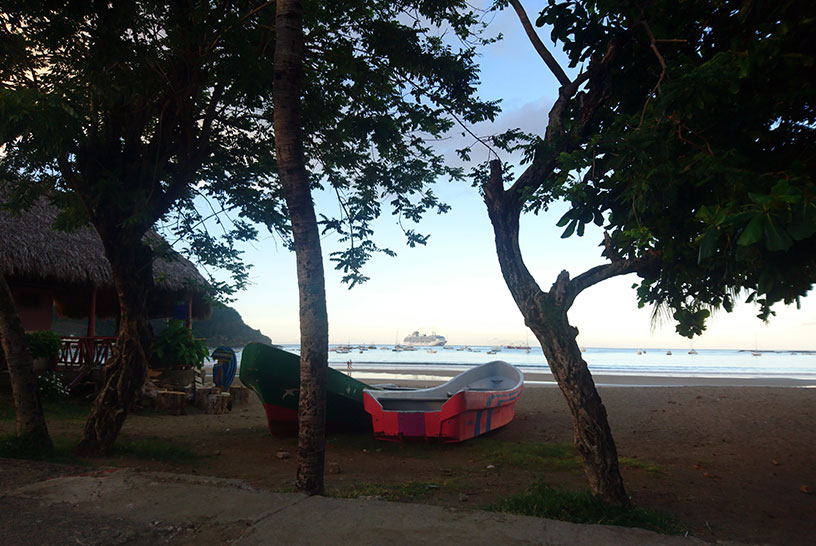 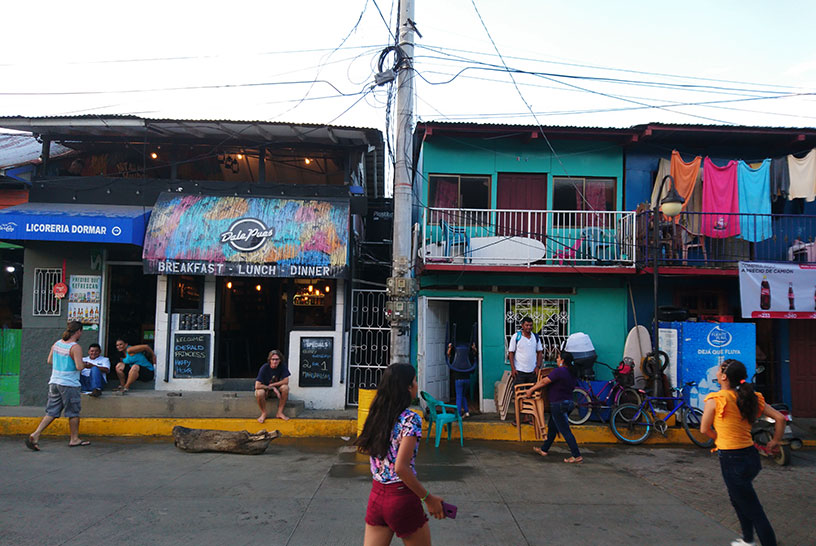 Nicaragua’s people are a people of poetry and art, of celebration and almost unfathomable generosity – it is difficult to fit their big hearts and gentle souls into the landscape of strife that is the country, but Nicaragua has been a place of upheaval and instability throughout its existence. (It could also be that this is the very root of the people’s beauty like is sometimes the case with the fiercest of places.) Reading about and talking with the Nicaraguans, it is easy to get lost in long intriguing tales of the CIA and the Contras and the Sandinistas and the various wars and dictatorships since independence from Spain in 1838. As recently as the 1980’s war was still raging – we would meet quite a few people with amputated limbs or old war wounds later on. The ’90s was the beginning of a kind of peace that has lasted into the present.
In 2018 the country erupted in violence when the current government was criticised for behaving like dictators generally and for increasing taxes and lowering social benefits specifically. The severe military clamp-down and reprisals from the government and hundreds of deaths (especially of peaceful student protesters) did nothing to contradict what seems to be a general belief in the government’s inadequacies. The volatility led to a mass evacuation of tourists, ex-pats and foreign business owners and by late 2019, when we arrived, things were still obviously quiet and many businesses were closed.
The economic knock that the country has taken and the impact it has had on their budding tourism industry is downright tragic. It is one of the poorest places I’ve ever been and maybe the one with the most potential to be a haven for nature lovers, beach people, foodies and the sweet of hearts.

But it is impossible to stay away. Nicaragua is magical in a way that is hard to describe but very easy to feel. It is obvious that people who have fallen in love will be back and new proselytes will continue to aggregate. 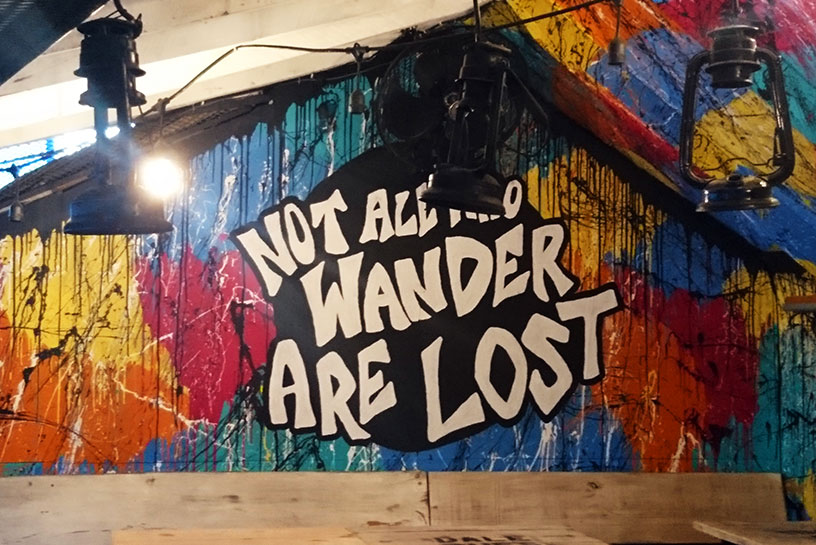 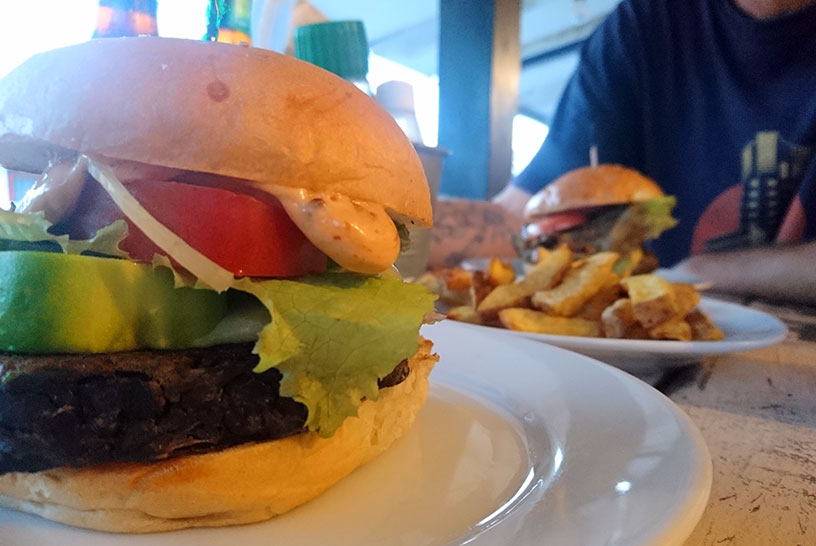 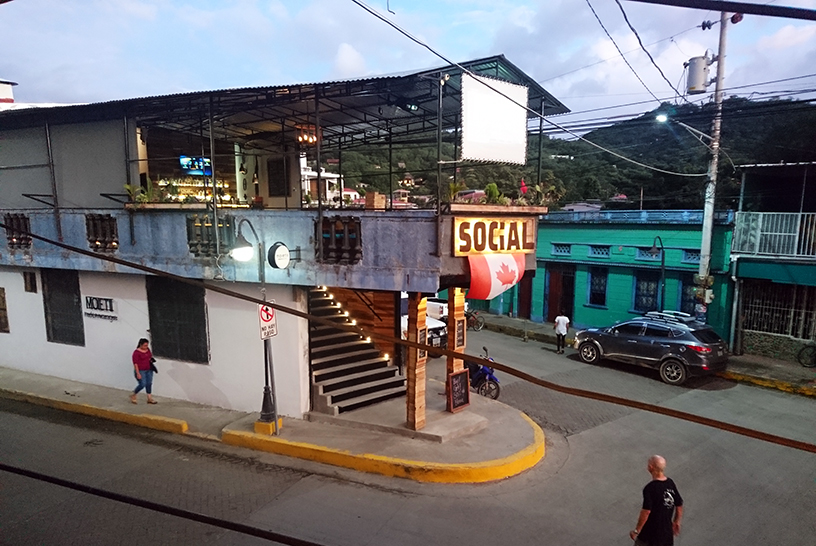 We didn’t mind it being a bit quieter all that much either. 20 years ago we would have loved to be part of a drunk throng of never-sleeping party people, but these days we have better stamina for lounging and oozing about.
We woke in the mornings to birdsong and the cackle of misbehaving parrots, the village stirring in a lazy soup of already-hot air. Across the road, we found a little shop that served our most favourite coffee in the whole world, butter-roasted properly as only the Vietnamese can. The cosmopolitan influence of many foreigners meant that we had our pick from delicious things to eat from all over the world. We had come to love the beans-and-rice fare that is the staple in most of Central America, but it does get boring. 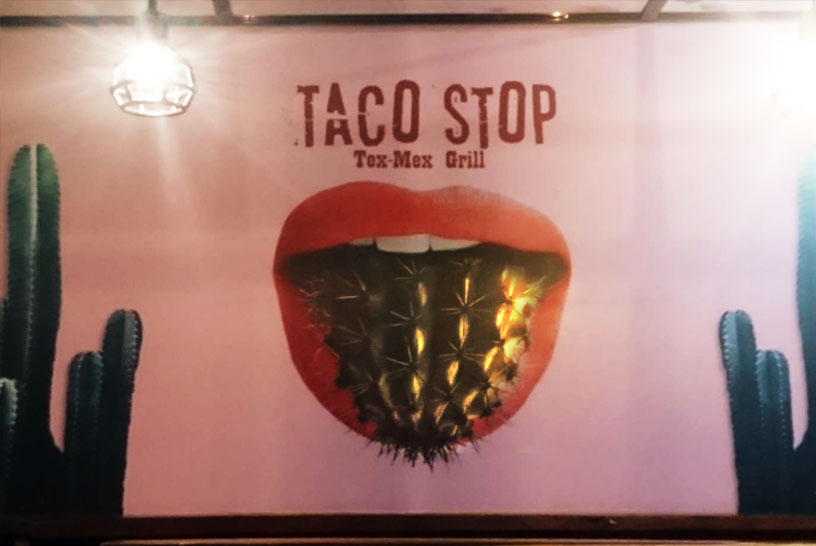 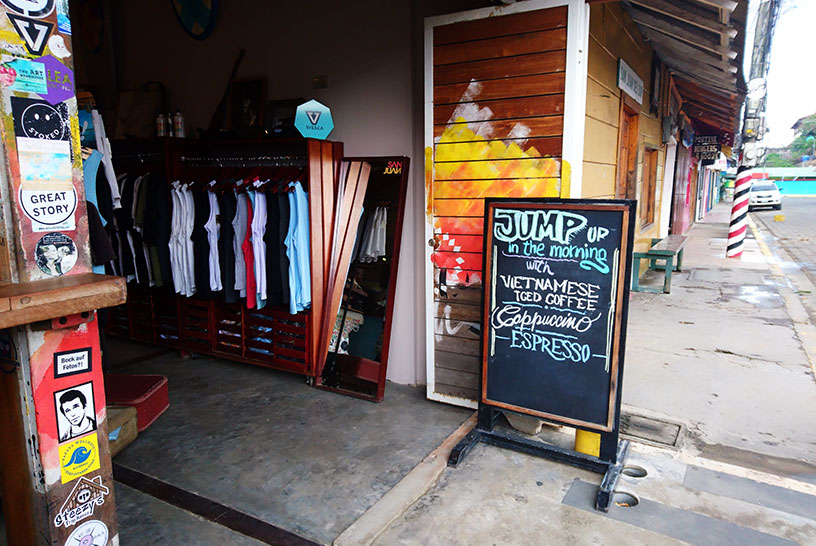 It is easy to catch a bus or take a taxi to visit a tiny secluded beach or hop across the lake to the island of Ometepe and gape at the volcanoes. Sometimes at sunset, we would sit at one of the many restaurants on the beach or we would grab a takeaway to eat on the sand while the lights of the boats twinkled on one by one. A huge statue of Jesus looks benevolently down on the beach from the right and invites visitors to the spectacular view from its feet. We had some of the best pizzas we’ve ever tasted, beautiful hand-made ice-cream and on a little balcony above a lively intersection, we ate burgers (both black bean and beef) that still makes my mouth water just to think about.
At home, we ate similarly to in Costa Rica, just at much less of the cost. Plantains, eggs, tropical fruit, herbs and vegetables often just folded into a warmed taco. The supermarket across the road was relatively small, but well-stocked (down to Kikkoman soya sauce) and the women behind the counter friendly and helpful. Every day we could find a new feast of fresh fruit lovingly stacked at the entrance. 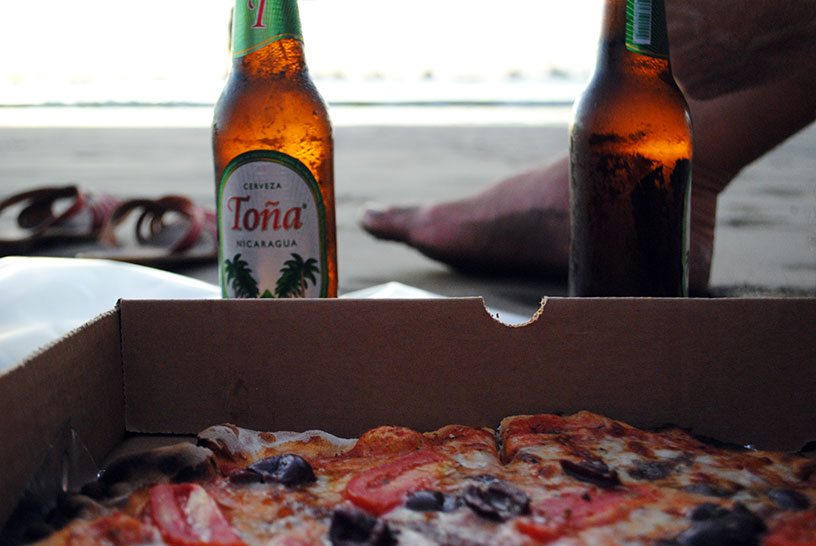 For a while we seriously considered learning how to surf, buying a motorbike and finding a bungalow to disappear in forever, but that only lasted until Granada started calling. How we heard her voice and felt her pull over so many miles is uncertain, but with just a tiny swing (of a few nights) through the green hills above the village, and the luxury of both wide views and jungly privacy, we were packed and comported, ready to head North. 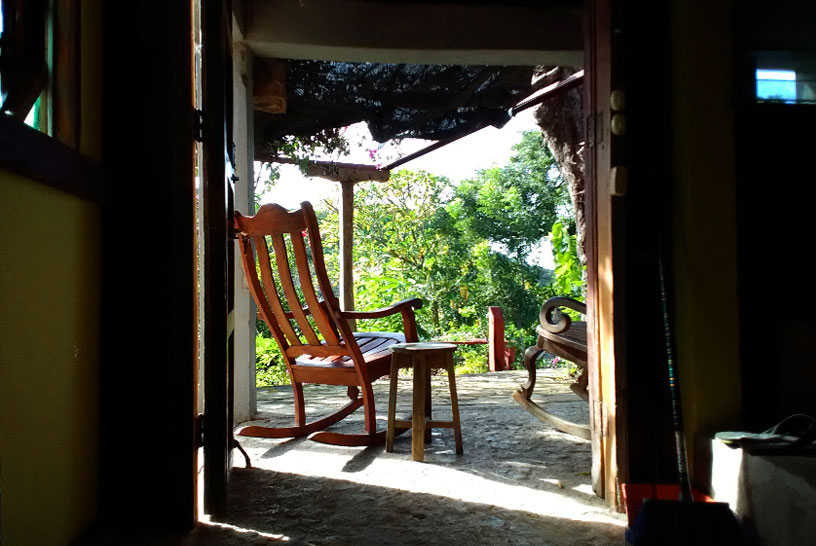