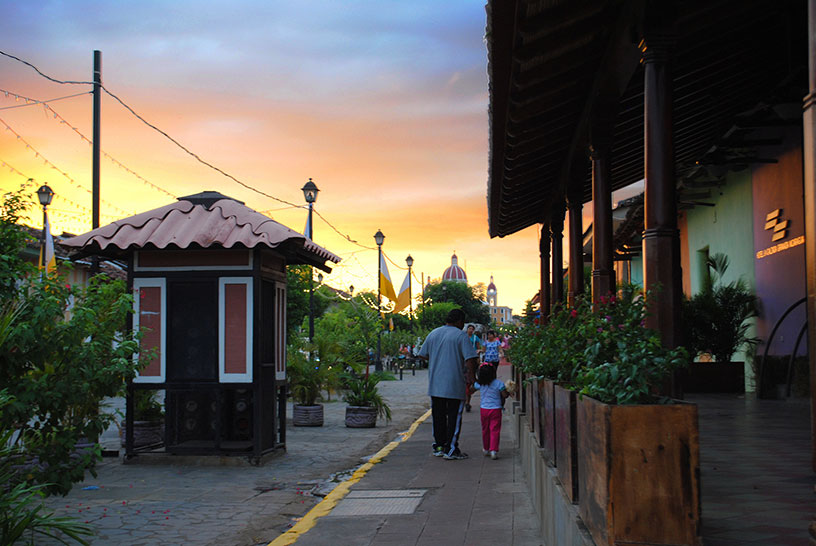 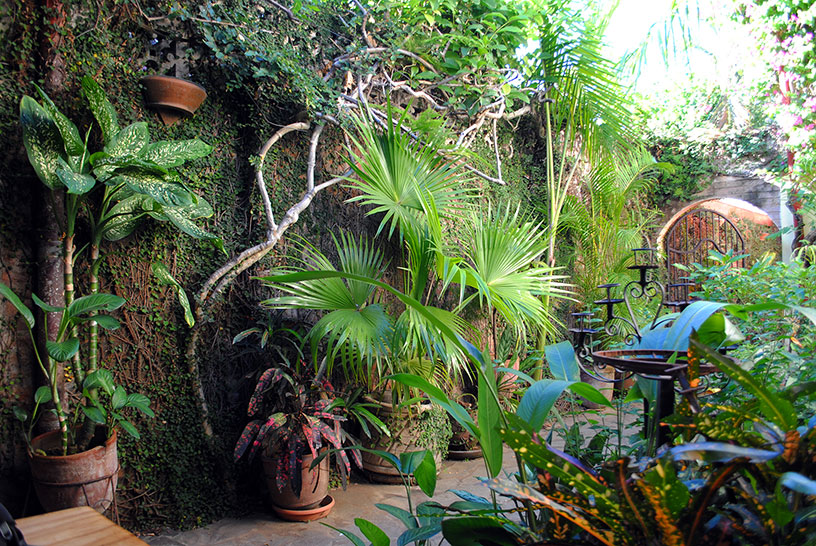 From the very minute we set foot on the paved roads of Granada, we were in love. I have always had the impression that every place has an emotional thumbprint, that every town or city has a district feeling (the only place I have ever been to that had been difficult to read is Vienna), Granada sings of contentment.
We were dropped off in the very heart of the city (it feels like a town) on an old wide road with tall and colourful buildings packed tightly on both sides. It seemed Moorish yet Mexican, European but in that very special dilapidated old colonial sense. It was dry and warm compared to the moist heat of Costa Rica and it was quiet in a lazy-Sunday-afternoon kind of way, the spaces between the sounds of the birds seeming bigger than usual. 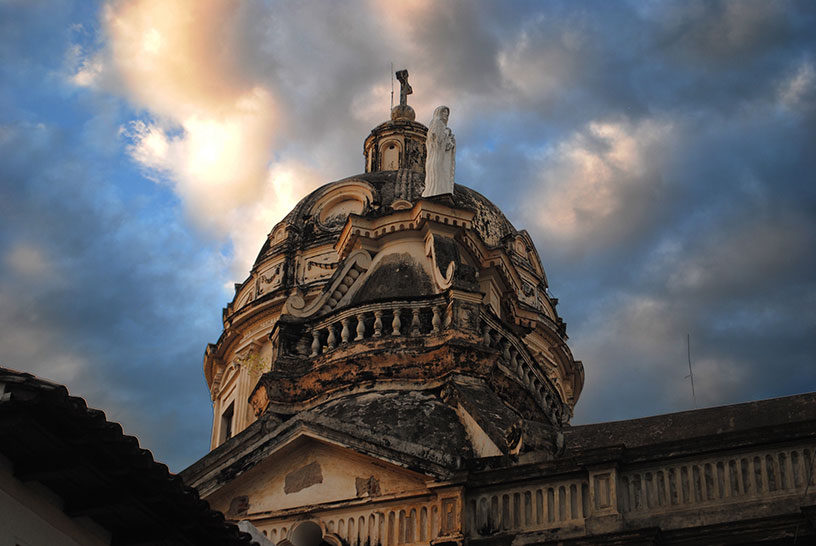 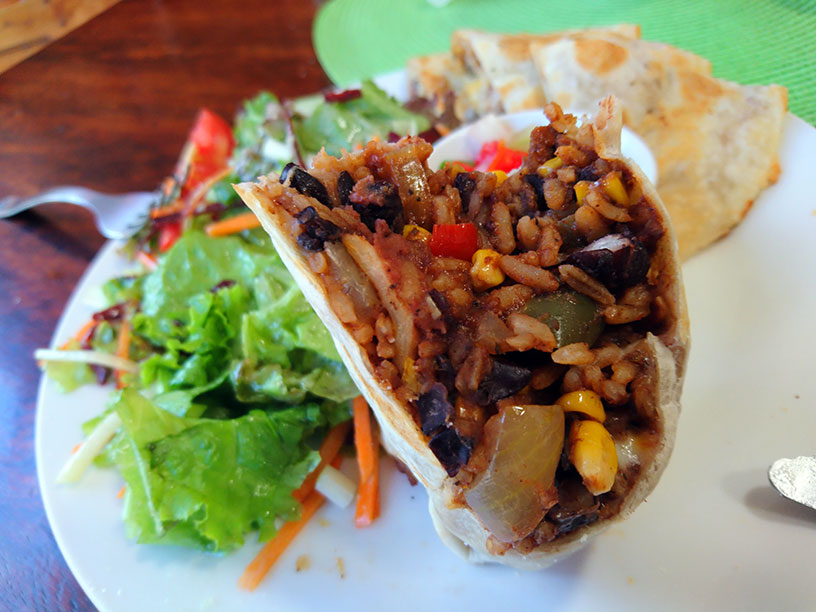 We had a bit of time to kill before booking in and were grateful to discover that behind the high walls and portals (the only way to describe the big double doors of the buildings facing onto the street in the centre) often doth lie an oasis. Fountains, lush green gardens and deep shady patios hide at the hearts of many buildings. Our first cool and colourful exposure to this phenomenon was at a juice bar/restaurant with the delightful name of Rápido y Furioso. The owner is a Parisian who has lived in Granada for many years and who sweetly filled us in on life in the town while engaging in a bit of banter with every person that came through the door. We would soon discover that he is just one of many expats who have retired or are living in Granada.
In the streets outside people were warming up for the Festival of the Immaculate Conception and the resident cat slept happily through firework explosions that made us jump inches off our chairs at irregular intervals. Maybe the animals were used to the racket? I would later fervently wish for this to be true because by the time New Year’s came around, the din would be absolutely breathtaking (and exhilarating, I have to admit).
Their capacity for celebration was evident in the people from the word go. I have never been to a place where fiesta is such a big part of life or happens so regularly or with so much conviction. It speaks of a joy for life that is rare to find and utterly marvellous to live with.
There was magic there, the boyf would laugh when he heard me trying to make anything more out of what was already a very rosy reality, but now, looking back, he agrees. It is in the very subtle way the world responds and folds around one. A certain vibrancy to the give and take, to the forward and backward, to the dance. It is easy to notice in retrospect because it’s obvious when it is missing. It felt life was enough, like nobody was chasing the wind. 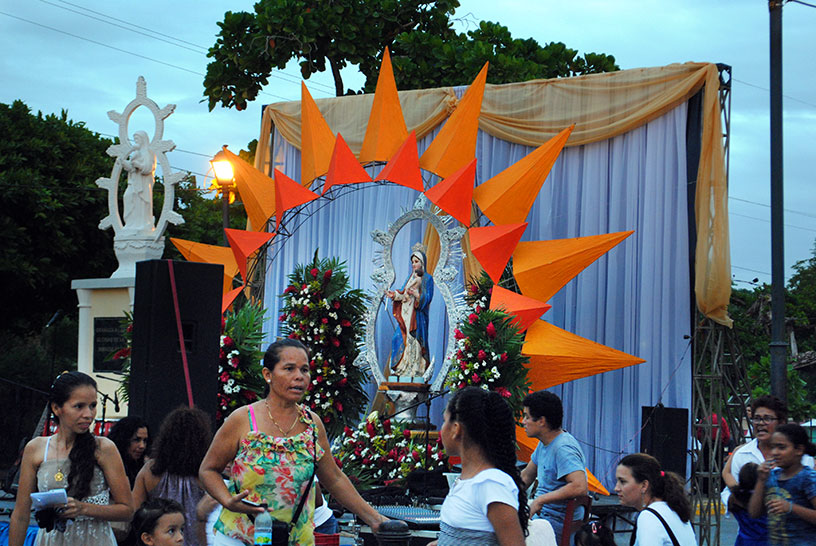 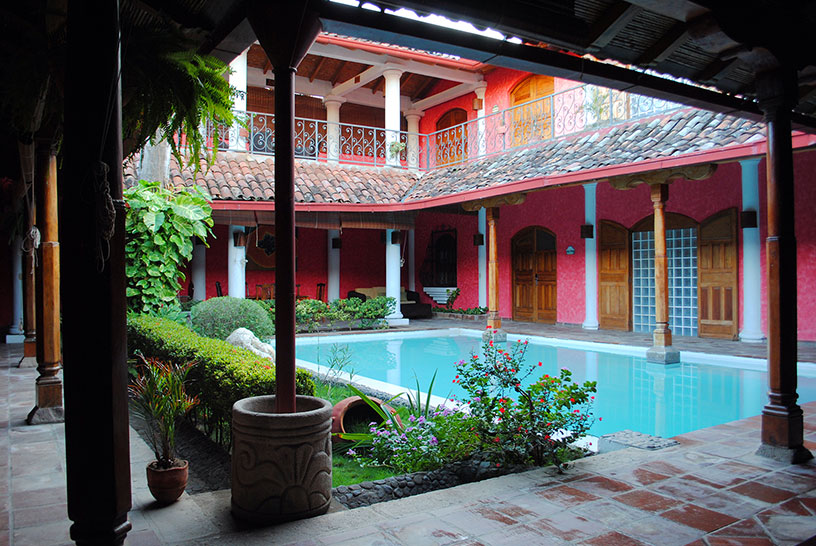 In the streets of Granada taxis, motorbikes, cars and horse carriages share equal space. Unlike in much of the developed world ‘health and safety’ hasn’t yet killed creative transport ideas and we would often see entire families on a single motorcycle – the highlight being a mom feeding her baby while her husband took care of the steering and the other kids hung off the back. (Possible, I suppose, only because there is absolutely no rush and the traffic, like life, flows and stretches like molasses.) Taxis were abundant, cheap and friendly and varied in style from barely held together rattle-traps with horsehair stuffed seats (this may be a slight exaggeration) to sleek blue-LED’d disco machines with recessed wheel-well lighting (no exaggeration). Taxistas would stop to check if you wanted to go in the same direction as the other passengers in the car and we would often enjoy ride-sharing in the old style, jabbering and smiling (with us doing more of the latter).
Sharing the roads with horses is like something out of a fairytale, both in the hearing of their cloppity passing and strangely enough, in the wholesome farmyard smell of their dung. Once we moved a little out of the centre of town, the horses would be around night and day, loudly chomping grass outside the window. (We also shared the house with an enormous lizard who lived on the roof and in the ceiling. We only saw it once in its full almost-a-meter, ring-tailed splendour, but we could hear it skittering around on the roof often, probably hunting birds, as we eventually came to realise.) 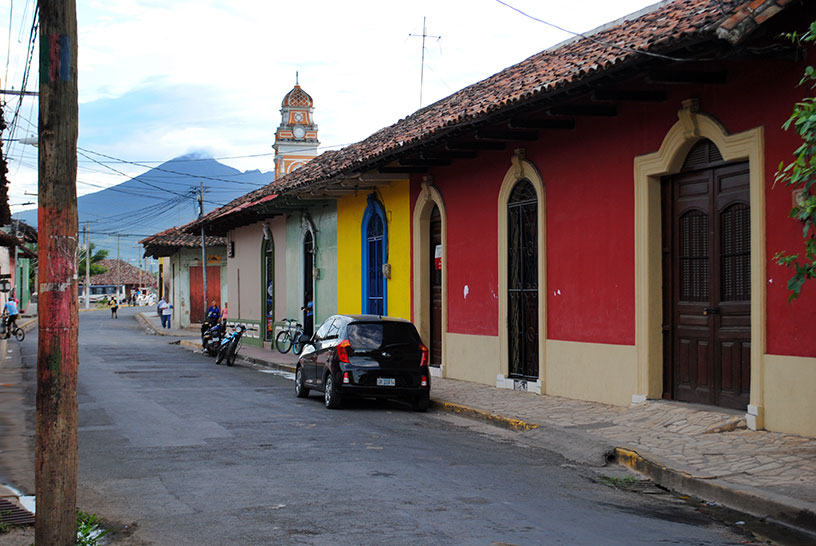 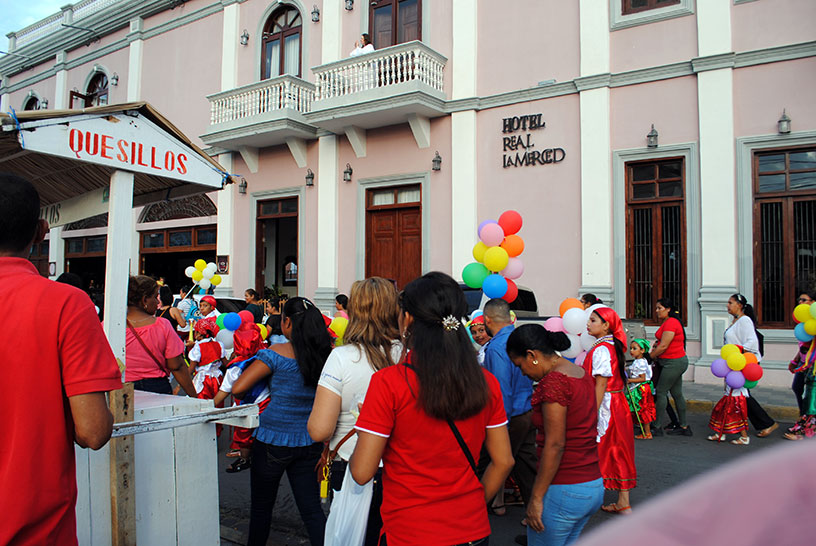 There is a street-level economy in Granada that gives vibrancy to everyday life. Our first host lady froze bags of ice to sell to the people walking past, the neighbours put out a table and a small fire on the street every evening to make both dinner and a bit of fiesta, and our Spanish teacher made ice-cream sandwiches that he sold over the open half door opening onto the street. In the late afternoon, the stalls beside the lake all had piles of freshly caught, small and large fish, glistening in the last light.
Incapacitated by the torpor of mid-day when nothing else was moving, we looked forward to the shrill bell of the smiling, single-toothed, shaved-ice man. He scraped the ice from an enormous sweating block with a special tool and dressed the refreshingly fluffy white balls in a lurid yellow syrup made from sugar and berries – reminding me a little too much of the toxic, wrinkled Syringa berries at home, but never giving us anything but joy (and forgotten era romance).
Something is very beautiful about a healthy, enterprising local economy. It did seem (still seems) so much more practical, sustainable and human than one based on driving miles to a big faceless supermarket that primarily serves to enrich a careless multinational. It is alive and connected – shopping on the street plugged one in at the root of the place and gave one an idea of the pulse of the people. 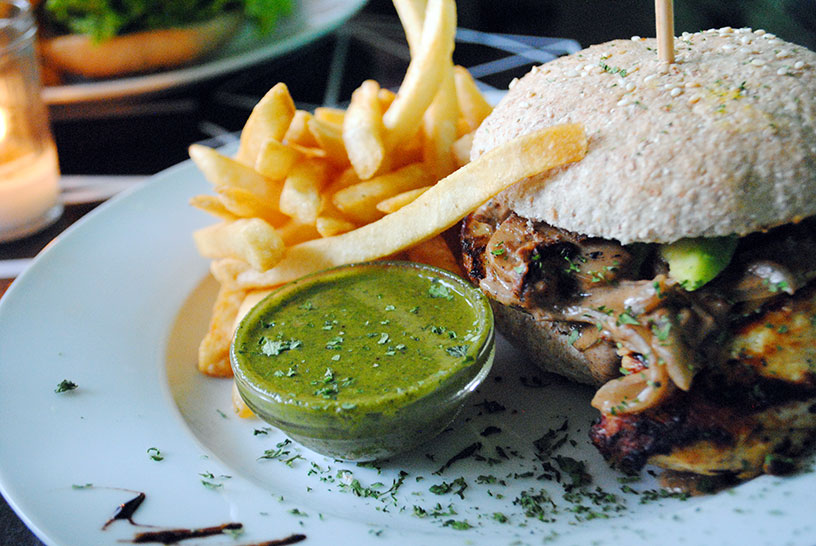 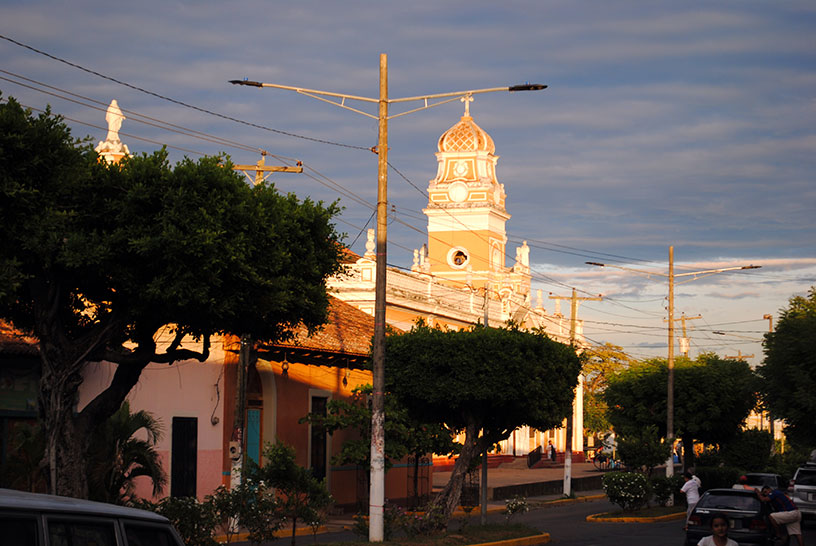 Granada is the oldest city in Central America. It was founded next to Lake Cocibolca (or the Grand Lake of Nicaragua) by the Spanish conqueror Francisco Hernandez de Cordoba in 1524. Francisco named Granada after his home in Spain – something that turned out to be quite confusing for some of our friends who felt they couldn’t keep track of us hopping between Europe and the Americas so often. I’m not sure, but that might also be why the Nicaraguan currency is called Cordoba. Granada’s scale, with a population of just over a hundred thousand people, suited us so well that we have since decided it is our preferred size for a city. 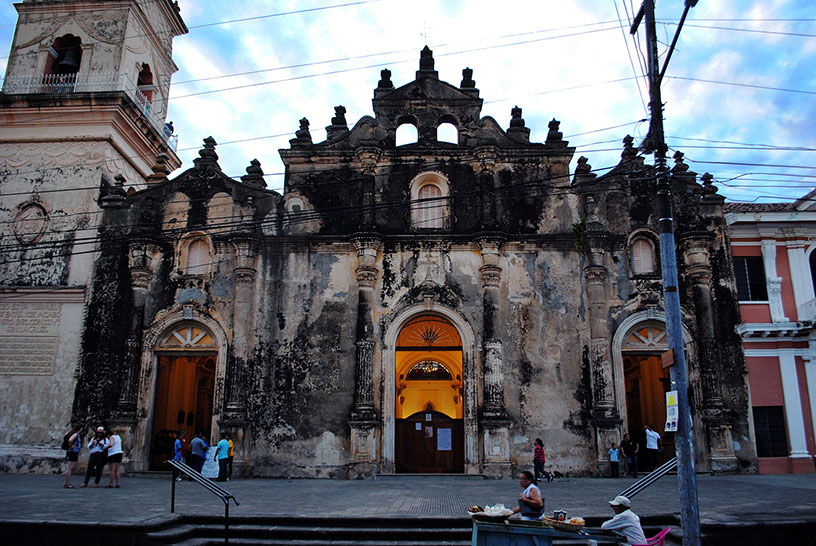 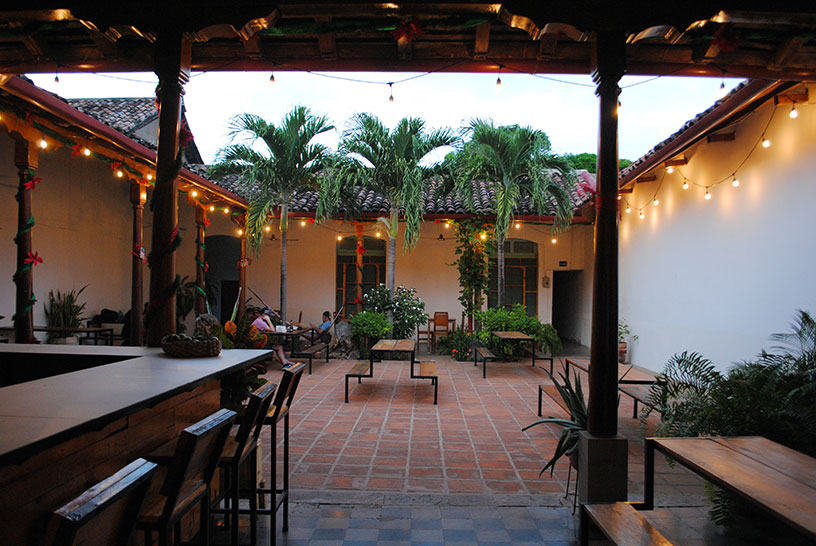 My favourite building by far was the very old Iglesia La Merced that looks like a mouldy old wedding cake and that furnished the perfect backdrop for the colourful populace on a Sunday or over Christmas and New Year’s. Through the middle of Granada, perpendicular to the lake there are numerous gorgeous cathedrals, from the Iglesia Guadalupe near the lake to the pretty blue and cream Chapel Maria Auxiladora further inland, all worth seeing and all pretty difficult to miss during a holiday or a celebration when parades pack the streets and fireworks light up the skies. 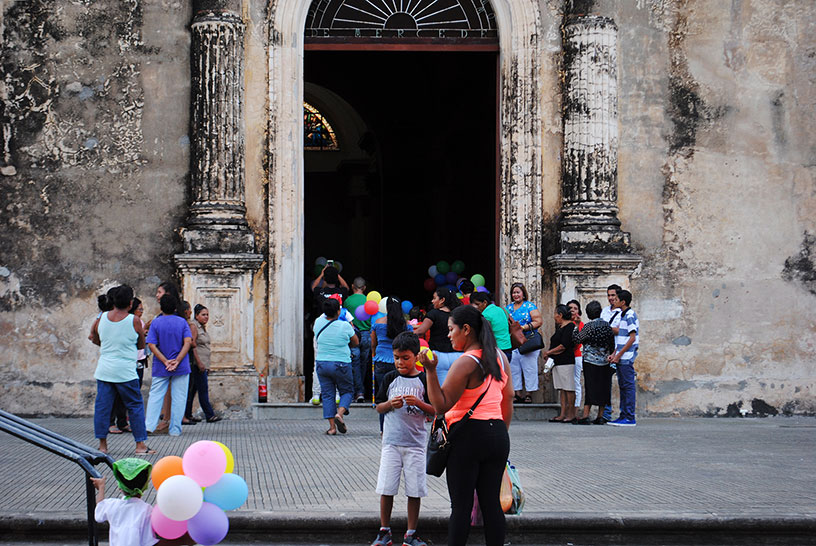 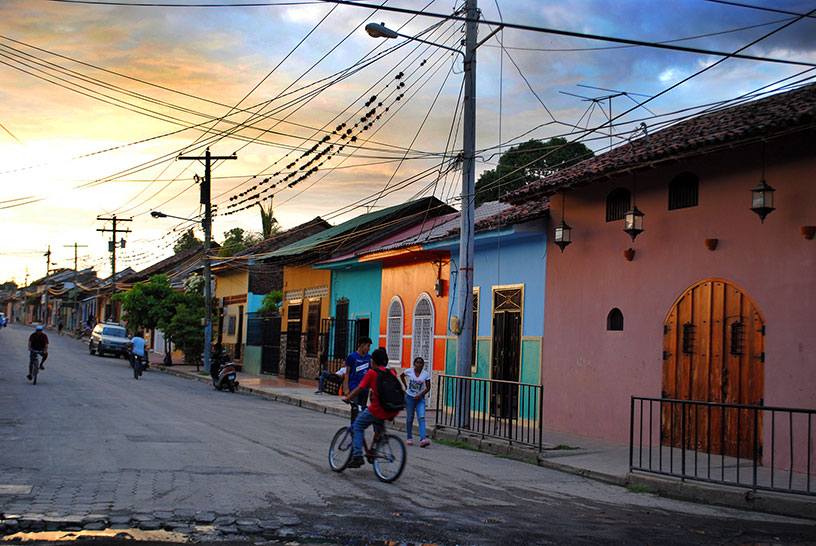 For the first time ever I could open a map online and search for restaurants and find that all of the restaurants mentioned were worth a look. Maybe we were lucky, but we were never disappointed. We loved the courtyard at Pan De Vida where we ate out-of-this-world, oozing calzones and where we would return often to talk to the people and stroke the handsome grey dog, Winston, while the setting sun painted the sky in luminous psychedelic streaks.
In the evenings, the main road, Calle la Calzada, is lit with lines of light and the smiles of throngs of foreigners and locals visiting one of the very many restaurants and bars with tables placed all the way into the street. It feels like a festival every single evening.
The Irish pub (Quinn’s) was just around the corner from our first house and stayed our ‘local’ even after we moved further away. Their pub fare was great and the crowd always fun, always friendly. We even had a late Xmas lunch there (with all the trimmings) when absolutely nothing else was open.
Our favourite hamburgers were served on fresh yeasty wholegrain home-made bread with gorgeous sauces (including a delicious green herb sauce) and mouthwatering fries amidst a sophisticated selection of Rock music a bit further from the lake, in La Frontera.
El Garaje bewitched us with beautifully fragrant food that tasted delightfully complex after too much rice and beans for too long. The owners could speak well to the provenance of their ingredients and seemed genuinely delighted with cooking and restauranteering.
Bocadillo’s, Nectar, Bocanero and the Hotel Casa Consulado took turns to enchant us with icy cocktails (local rum and cokes, or Nica Libres, being a favourite), sweet conversations, cute snacks and occasionally, a real Nicaraguan cigar. 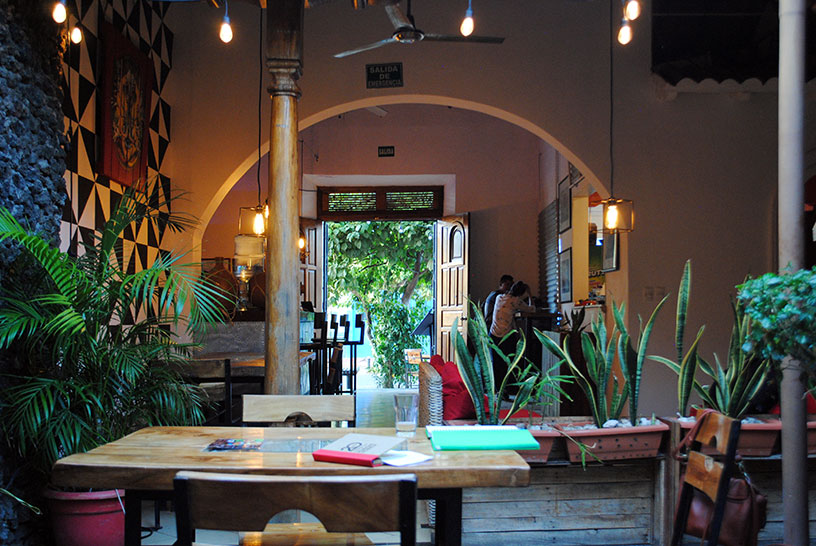 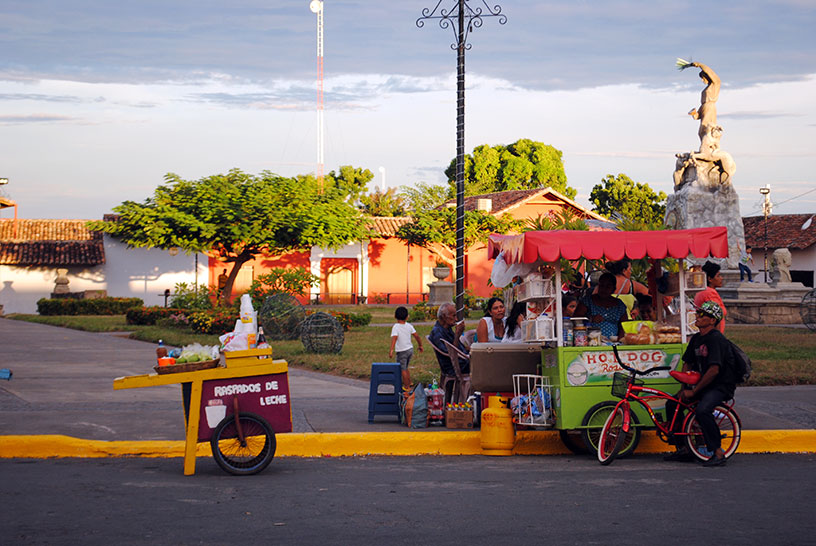 On the penultimate night, while we were sitting in our Spanish class (led by the infinitely patient and downright darling Robert, at One on One Tutoring) with the mosquitoes buzzing around our ankles and the lazy fan doing very little to aid a modest string of irregular reflexive verbs latching, I marvelled again at the warm and easy communion of the people outside. Even long after dark small children were out in gaggles or by themselves. A light bantering exchange weaved through the balmy night. I wondered if they realise how fortunate they are, how very extraordinary their society is… Granada and the life in it, is a treasure. 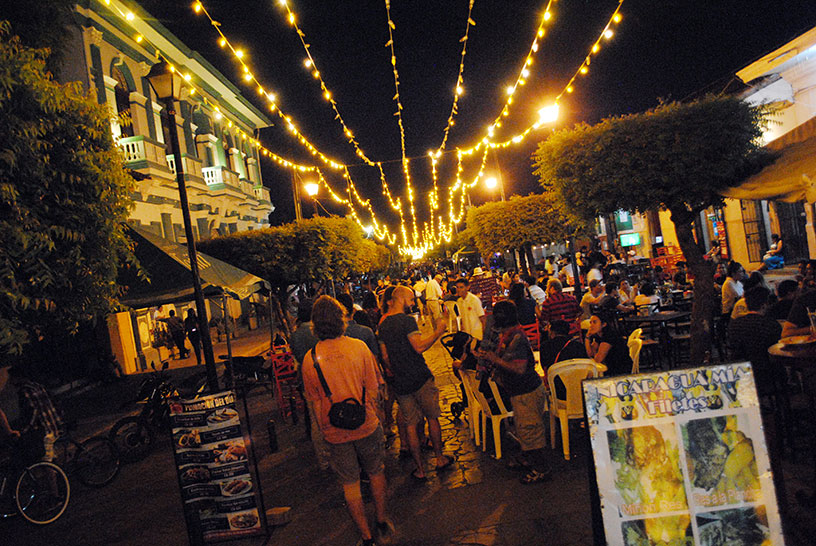 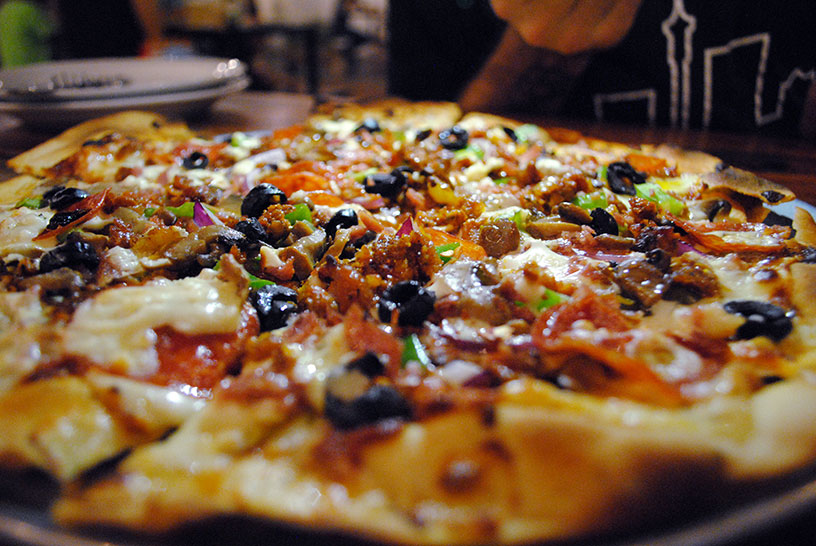 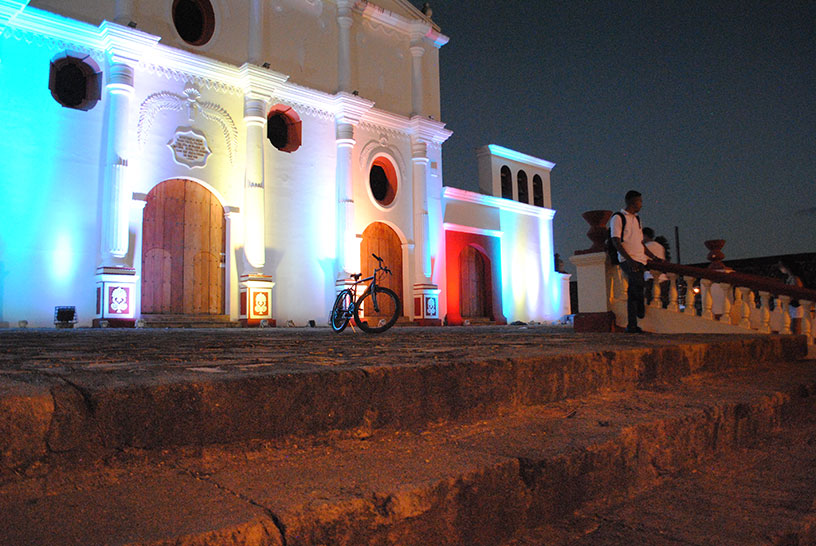