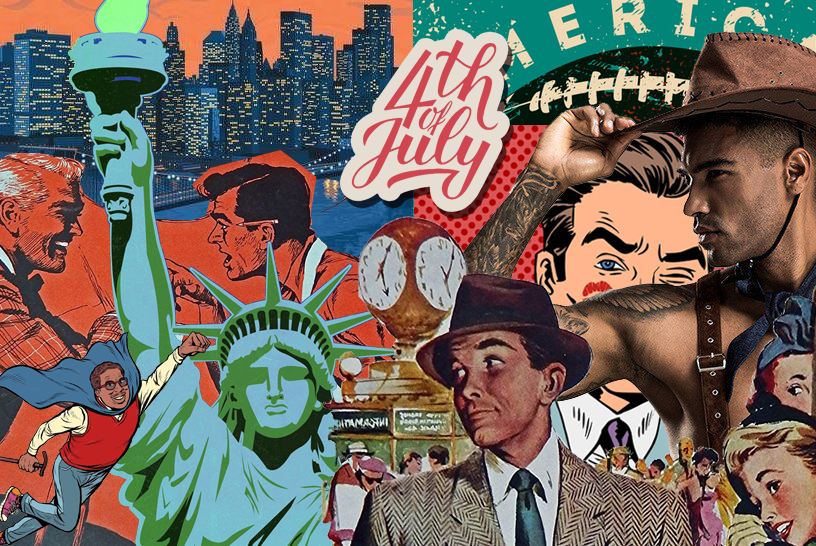 American Independence Day. I’ve wanted to write about my falling in love with the American Man (and the USA by extension) since our little 4th of July party in the States, but I have never quite gotten to it. In part, I suppose, because I lack photographic evidence of the event (it is difficult to imagine a blog post without pictures), but also because it isn’t a rosy story, it is in part a lament.

There is something very special about running around in the street and setting off a conflagration of fireworks with the locals. Actually, just making a helluva racket alone is transporting and invigorating in a way that I had not experienced in a very long time. Maybe never. I feel more for the poor animals these days than I feel for exuberant displays of independence, but when in Rome… Anyway, we found ourselves in a neighbourhood of Portland with friends and a lot of whiskey and tequila for the evening of the Fourth. The buzz in the streets and on the train on the way there was simply electrifying, people were gathering in great hordes to watch the fireworks over the river in the centre of the city. We had decided to move across the river into the old neighbourhoods, mostly because we were dined (we ate in a restaurant high in the sky in what felt like a smoking lounge – just without the smoke – with spectacular views of the city and a deliciously American menu) and we were eager long before it was even properly dark. Friends and friends of friends and a cosy block party is far more the thing anyway, as it turned out. (I’m building up to the moment when I had a glimpse into the heart of America with trepidation because it was such a vivid and radiant moment, I am scared I will not know how to share it.)

It is a hard thing to find the iconic American Man in the modern USA. The romance of cowboys and frontiers and naked American Spirit is overlaid with so much that is modern and corporate and trampled-flat that the ‘real’ American man is quite difficult to discover. One could argue that is more of an ideal or a construct than a reality anyway. It is the picture we foreigners have in our heads after years and years of secondary exposure through novels and movies and old gung-ho cigarette ads. It is the throb of a million songs and a million stories played out against the vast landscapes of the US of A. It smells like bourbon and log-fires, like dust and cornbread, like Lucky Strikes and horse sweat. It sounds like the cry of an eagle and the slip of a salmon and it echoes across miles and miles of prairie, through the snow-covered pines and back around to hitch up a bit of banjo twang before fading over a catfish infested swamp. And it feels raw and brave and exhilarating.

It might be that, like so many other (indigenous) people who have a connection with the land and the wisdom from it, the American Man is endangered. Its habitat is severely reduced and threatened, its connections to nature and tribe are often severed and it is living in a role (particularly in terms of its gender) that society has the audacity to prescribe without knowing the first thing about what it means to be a man or what it wants and needs from its modern men. Oh, society does want its men to be strong and inflexible and closed-off and invulnerable and ‘manly’, that still works quite well in a world where money and war and material success reign supreme. You can’t have soldiers and titans of industry who are also vulnerable and giving. You can’t have profiteering planet killers who are also wise and connected and tuned into the earth. Greed, avarice, misanthropy, violence and rage are all signs of a caged and bruised humanity. One bred and prescribed, manufactured and styled. One completely at a loss. What do you do with your pain, your vulnerability, your desire for genuine connection, your loneliness, your shame, if there is no way to express it, no place it’s allowed, nowhere to go with it? When your very own society wants none of your real humanity?

It is a shitshow. Unlike so many other groups – women, gay men, gay women, transvestites and more recently, every possible shade of trans, bi, fluid, pan and a-sexual – the long-established ‘male’ has not been emancipated. It has not had to fight for recognition or rights or identity or a place in society – and it shows.
The bad breeding of men is in part a pampering and in part a violence. It is comfortable, but also alienating. It is in the way parents think boys should be boys and boys don’t cry and in the process both spoil and deny them. It is the story of a billion little princes. If it was a one-sided atrocity with no cushioning, it would never have held. Boys would have revolted. But the whole of society (including the female) is shaped to reward bad male behaviour (across almost all cultures). To cushion, cuddle, spoil and reward them while they become inhuman and repressed. Violent in their inability to be vulnerable and open to connection.

The plight of the American Man is not isolated, but it is particularly vivid. We’re not even talking about farms and small agricultural villages lying abandoned on the quiet by-roads (sometimes within earshot of the buzzing interstates) – no, that is an idyll long lost, together with the Arcadian lifestyles it supported. No, today, there is also an almost complete break-down of the blue-collar economy. People who used to make money by working with their hands are disappearing and with them a large swath of lifestyles and communities. The America of today is a nasty looking thing in many parts. Chain stores, franchises, strip malls, depleted farmland and only a few types of fast food joints litter the landscape in a particularly bleak and unimaginative way. Enterprise, creativity, small businesses, interesting mom and pop get-ups with a bit of history or flair have all but disappeared under the fat sole of convenience and big business. It is often grim, mostly boring.

No small wonder then to feel downright stirred by the sight of an American Man lit up by the smoky explosions of an Independence Day street party. To share in the unbridled joy of celebrating freedom. To holler in black glee against a starless sky. To see every rhinestone cowboy find his horse, his breath, his rhythm and his place in one person, in a single moment. To see mastery and expertise give root and flower, muscle and spine. It is a revelation and a gift to see pride of place and person wash like the glow from a mega pyro cannon across a widely smiling face. No limits to the giving, to the joy, to the child-like availability in the moment. All out, all in, all together. Complete.
In a single blinding moment, I saw straight into the American soul. And I loved it.

He might take a bit longer to find and he may look nothing like the Levi-hugged poster boy one is tempted to conjure, but the good news is that the American Man is very much alive. It is throbbing along many new veins, finding new paths, looking for new connections. Like in any good fairytale the hero is not an identity mired in time, he is an evolving, searching and conquering type who fights battles on grounds that did not even exist as little as two decades ago. Once I smelled it, I saw the signs of his valiant progress everywhere. It looks different, it feels different and it bears almost no resemblance to the Marlboro Man, but he is out there. He is stepping through the lie – nurturing, helping, minding, caring, fostering, serving – because ultimately these are not the things of sissies, but the things of humans.